- November 09, 2009
Documentaries from around the world converge in Edmonton for Canada's oldest and finest festival of its kind

BEFORE we get into Saturday's edition of the 4-day Global Visions Film Festival, I think it's only appropriate to give you a little history of the nation's first and oldest documentary film fest.

"We operate from the knowledge that the world is getting smaller, and that all people are interconnected, interdependent citizens of the global village," reads the Mandate & Mission Statement on the festival's official website.

The GVFF claims that it "aims to entertain, engage and inspire our audience. We entertain them by bringing original, top-quality documentaries made by talented filmmakers from across Canada and around the world to Edmonton every year."

It began in 1981 as the Edmonton Learners Centre's Third World Film Festival, but by 1998 had become a non-profit society called the Global Visions Festival Society, which hosts the annual festival in various venues in Edmonton. Since its conception more than 80,000 film lovers have participated in keeping the GVFF alive in our city.

This year's event, the 28th annual, kicked off last Thursday (Nov. 5) with the Opening Gala at the downtown Paramount Theatre (10233-Jasper Ave.), which hosted the 77-minute docu-film Broke.

The film was shot at an Edmonton pawn shop by award-winning European director Rosie Dransfeld, who came to our city to capture the conspicuous poverty in our own backyards, the ceaseless desperation that affects a whole community in the inner city. When the project had come to an end, Dransfeld discovered that she had found a story that most local critics were surprised to realize had come from our streets. 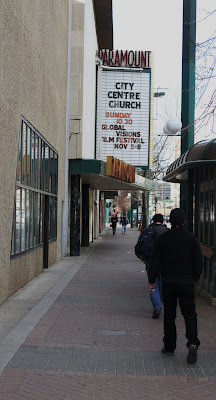 An illness--that had nothing to do with pigs!--kept me away from taking in Broke during the Opening Gala, which also included a Q&A with Dransfeld and the film's two "stars," Jewish pawnbroker David Woolfson and his ex-con companion Chris Hoard. So instead, my sister Carrie and I headed down to Jasper Ave. on Saturday for the second screening of Broke at the 57-year-old Paramount.

As usual, Edmonton's downtown weekend streets were near vacant, so parking was a breeze. The Paramount's marquee read "Global Visions Film Festival Nov. 5-8," so we knew we had the right spot. There was a minor hustle inside when we went in to buy our tickets ($12 each), pick up our programs, and then head past the snack vendors into the darkened theatre.

There were a couple dozen people already in their seats in the room, which was bigger than I had remembered it. The last time I had been to the Paramount was for a showing of Tom Cruise's Mission: Impossible, in 1996, back before Scientology turned him into a couch-jumping eccentric.

But the cozy blue seats filled up quickly, almost to full capacity. Patrons munched on their paper-bagged popcorn and canned soda, most of whom remained in their fall-weather apparel. Apparently, there had been an issue with getting the heat turned on in the aging building since Thursday, proving a distraction for the whole 2 hours we spent there.

Shortly after Noon a gentleman got up onstage and introduced himself as Scot Morison (pictured below with Dransfeld), Youth Media Day Coordinator. He apologized for the chilly setting, welcomed us to the screening, and thanked us for our support, before introducing the films we were about to see.

Before Broke projected onto the giant screen, we were treated with a short doc by local filmmakers titled Life After Diamonds. Thank God the film, directed by Sheryle Carlson, was just 12 minutes long, because I wasn't sure if I could take any more of its look into the dark side of Sierra Leone's diamond mining industry.

Life After Diamonds (2009) was filmed on location, but failed to emotionally connect its audience with its tagline, and I was indifferent on the whole issue, despite monotonous interviews with locals and individuals who had dedicated themselves to making a change in the region. Had this been a full-length effort, I may easily have walked out, and the sound problems mid-film didn't help either.

Broke began immediately after the credits for Diamonds had finished rolling, and I couldn't have been more relieved. There's not much use in going into the details of the "cinema verite masterpiece," because I Heart Edmonton will be posting a review shortly. But it was more than worth my 12 bucks, and the 20 bucks I'll spend to get it on DVD. 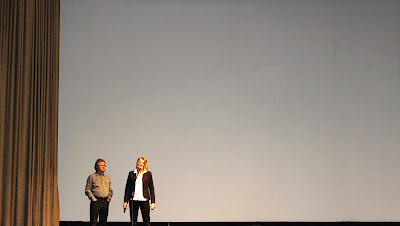 After the movie Morison returned to the stage to introduce us to Dransfeld and Diamonds filmmakers Carlson and Larissa Stendie, for a short Q&A. The trio of ladies filled us in on a few stories and tactics of their respective films, and by 2PM the crowd had checked out. Dransfeld, though, remained at the chilled theatre to answer any further questions and to sell off some Broke DVDs.

The GVFF continued on into Sunday night (Nov. 8), exhibiting some 50 documentaries from 25 countries at the Paramount, Metro Cinema and the Stanley A. Milner Library Theatre, over its 4-day run. For those of you who missed the festival, no worries, because there will surely be a collection of world-class international docs making the rounds at next year's GVFF.
e
Broke documentaries Global Visions Film Festival Life After Diamonds Paramount Theatre Rosie Dransfeld