- November 05, 2009
e
HOMELESSNESS is a dilemma that faces every major city in the world, and Edmonton is by no means the exception. It's an epidemic that has, believe it or not, increased 125% since 2000, and it's a problem that faces people from all walks of life. In addition to the personal pains of homeless individuals and the stigmatism that tags along, homelessness costs as much as $135,000 per person (according to Calgary stats).

I took the photos below four years ago, in November 2005, when I headed downtown with one intention in mind: to capture the problem on film. The first displaced person I came into contact with was Joanne. She wore frayed garments too big for her battered frame, and men's work boots that looked like they would come off her feet with every step.


When I asked Joanne if I could take a few snapshots of her, she said yes before I could even finish the question, as though this was nothing new for her. She immediately sat against the wall of the old Army & Navy building on 97th Street, set down her styrofoam cup of coffee and her lit cigarette, and posed for my camera. After our impromptu photo shoot I gave Joanne a few dollars for her time, and then she walked off.

Fortunately, a committed team of Edmontonians, including Mayor Stephen Mandel, have come together to eradicate homelessness in our city, with "A Place to Call Home: Edmonton's 10 Year Plan to End Homelessness" (January 2009). Last year there were an estimated 3,000 Edmontonians without a place to live, 40% of which are Aboriginal, but the Edmonton Committee to End Homelessness has detailed plans to bring that number down to zero by 2018.

Our city has become famous throughout the country for its generosity, so it comes as no surprise that E-town hosts the annual Homefest concert, which draws "attention to the desperate need for more affordable housing and the eradication of homelessness." This year's event took place Sunday, November 1st at the TransAlta Arts Barns in Old Strathcona, and was hosted by the Edmonton Coalition on Housing and Homelessness (ECOHH). The 2009 lineup included performances by dozens of artists and bands, including Captain Tractor, Maria Dunn, and The Beat of Boyle Street. 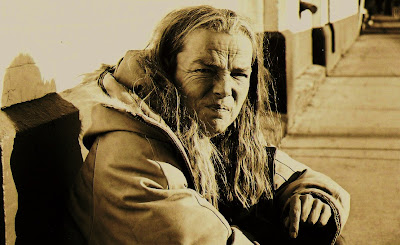 Who knows? Ten years from now there may no longer be any Joanne's left to take photos of in the streets of Edmonton. Let's hope so!