- May 27, 2010
Jesse Dangerously, Brzowski, H.W., and crew of local hip-hop maestros congregate at The Hydeaway 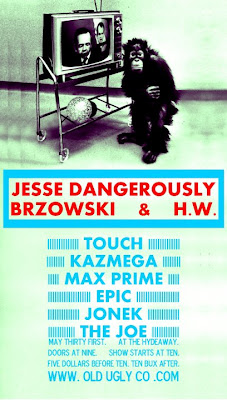 WHENEVER I post these event announcements I research the artists as much as humanly possible...or until my ADD kicks in and I lose interest. This Monday's concert at The Hydeaway, headlined by Halifax rapper Jesse Dangerously, was no exception to the rule.

But, I have to admit, Mr. Dangerously is not what you might expect in a hip-hop connoisseur, as I learned. He's slightly on the hefty side, and he sports a beard and specs. He dresses down, no bling in site. He's Caucasian and hails from a town famous for its piers and as the birthplace of Alexander Keith's. Oh, and there's that subtle, but obvious lisp.

But none of that shit matters, because Jesse's got the goods to push past all of it and command whatever stage he appears on. Scrolling through some of his accomplishments verifies his skills, including an ECMA Award nod, capturing the 2005 Music Industry Association of Nova Scotia's Urban/ Hip-Hop Artist of the Year honour, and even a Grade One perfect attendance certificate from Sacred Heart Elementary School. Not bad!

But Dangerously will not come alone.

The night's marquee is busy with other hip-hop monikers that'll take turns at the mic, including Maine's Brzowski, Boston's H.W., and Edmonton's own Max Prime, Epic, tOUCh, KazMega, Jonek, and my personal favourite, The Joe.

The licensed, all-ages block party will set you back just $10, unless you come before 10PM, in which case it'll cost you half that.

You can expect an evening of good music, without a doubt, but if you assume the truth of the event's Facebook page, you might also anticipate "girlz, grillz, handfuls of recently released & rehabilitated prisoners, beer, Diddy," and even "Mitchmatic doing a back flip."

I think they're lying though!

Whatever the night has in store, come by and support Edmonton's hip-hop culture with some of our city's best MCs. Bring you friends.

And if you're like me, you might have some trouble finding this place. It's on the upper level of the Jekyll + Hyde Pub & Restaurant, next door to the GO Backpackers hostel. Call me if you get lost!