- May 22, 2010
The EIFF get local moviegoers involved in deciding what may or may not make the cut for this season's line-up 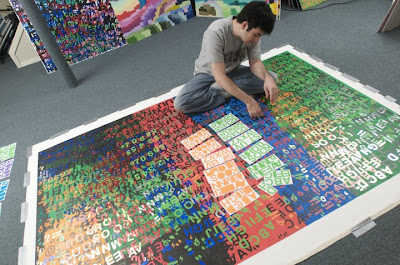 IT'S a brand new concept for the Edmonton International Film Festival. In fact, I was part of only the second (and most likely this season's last) group of local film buffs who were luckily chosen to pre-screen some of the shorts potentially up for EIFF selection.

I say potentially because their candidacy would be partially based on the opinions of us volunteers, who Ebert & Roeper'd our way through 128 minutes of short films from around the world last week (May 13).

Kudos to the EIFF for taking this logical route, allowing its own audience to partake in the selection process for its 2010 season (Sept. 24-Oct. 2). It only makes sense, afterall, to have us help choose what we want to see at this year's 9-day festival, now in its 24th season. What took them so long?

So, as I was saying, I eagerly and immediately accepted the invitation to sit on my ass, chew on some popped corn, and judge a bunch of mini movies that were probably the everything for each of their makers. You'd think that last part would've made critiquing their work harder, but....

Right after work that Thursday afternoon I headed down to Whyte Ave. and to the EIFF headquarters (#201, 10816A-82 Ave.), right above Cafè Dabar. A woman sat at a table in the middle of the entrance hall, passing out ballots and offering soft drinks and popcorn.

I was the first to arrive and was asked to wait on the extended balcony on the back end of the building as the others showed up. By the time 6PM rolled around there were 18 men and women, young and old, conversing on the balcony, where some guy named Mike--I think--informed us on what was about to go down.

He told us that we'd be split into two groups of nine, then would be taken into two separate rooms, and would sit through 11 short films that accumulated just over two hours of screen time. After each film we were to rate it out of five, and leave brief comments if we wanted to.

My group--thus, the cool group!--was escorted into a cluttered back room of some office area, with mismatched chairs, a projector, a mini popcorn machine, and a sky window that lent us some natural lighting.

Once we settled into our unforgiving seats (I think I broke my spine!) Mike (?) hit the play button and the first film began.

It was a 14-minute German picture called Lights, by director Giulio Ricciarelli. A police officer finds himself a purpose when he decides to erect a traffic light at a country bridge with the amount of traffic you might expect at a Bernie Madoff appreciation gala. Needless to say, the light causes a riff in local routine, and although it's just a movie, it just didn't make sense enough to give it anything above a two outta five.

Next up was 17 minutes of documentary footage of an autistic artist named Alex Masket (pictured above right), called Breaking Boundaries. He's nonverbal, so expresses himself through intriguing murals of random numbers and letters, trailed in colourful, beautifully bizarre columns unexplainable to the rest of us. 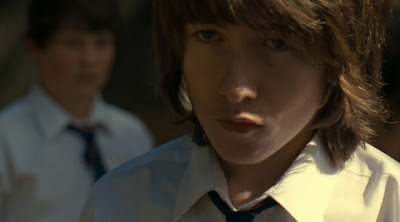 It was a nice story of making the best out of a bad situation, but Dennis Connors' short looked ragged on screen, dull and dark, and set to a repelling background score that they may have borrowed from an elevator. Great, now I feel like a dick!

Fortunately, the following flick redeemed the mini movie fest. It was a 12-minute Aussie comedy called Cockroach that told the story of Charlie (Damon Gameau), a man killed on his own wedding day and then reincarnated as an impressively-animated (by Postmodern visual FX house) cockroach who spends the rest of his days trying to reveal himself to his heartbroken bride.

Directed by Tropfest '05 winner Luke Eve (Dave in the Life), Cockroach is a high-quality tale flattered by LOL moments, and a lead character that somehow will have you not minding a roach infestation so much. Cockroach was penned by first-timer Raen Fraser, known to locals as "the Stanley Kubrick of Concord in the inner-west of Sydney."

Then came Canadian film Pretty Little Bits, a 9-minute documentary that probably shoulda never been made in the first place. There was no real direction or purpose in its aimless scenes of an eccentric antiquish shop owner negotiating price tags of what many would consider junk.

I hope the EIFF pass on that one...or maybe they can suggest it to the Calgary International Film Festival!

There was a complete 360 shift from Pretty Little Bits to the fifth film in the rotation, The Legend of Beaver Dam. Jerome Sable's Canadian "musical with guts" is 12 minutes of joyous gore set to original music that sounded like it came straight out of a Broadway bio of Queen!

L.J. Benet plays Danny Zigwitz, a nerdy camper who must save the girl he likes from a campfire massacre that perfectly harmonizes viscous carnage with melodic hilarity. Its only problem was that it lasted just 12 minutes. If the EIFF does not accept the evening's most logical choice, then someone needs to lose their job. Seriously!

After just over an hour of staring at the projection screen in the cramped back room of the EIFF, we intermissioned outside on the balcony again. The two groups emerged simultaneously and mingled briefly about the good, the bad, and the ugly of the prospective shorts. 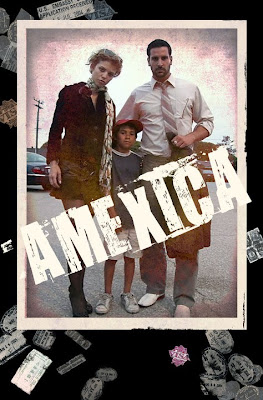 We returned to our seats only to be exposed to a cluster of not-so-good efforts, consecutively in Man and Beast (10 minutes), The Long Lonely Walk (12 minutes) (pictured above left), I Want to Be a Desi (6 minutes), and The Homestead (9 minutes). Maybe they weren't necessarily bad, but rather just weren't my cup of tea...although distaste seemed to be the general consensus in the room.

The night's shortest short, the 5-minute Helpline, was a refreshing transition into good filmmaking. It's a simplistic and subtle comedy in which a helpline operator (Brian Froud) unwittingly guides a suicidal caller through various methods of how to off himself. The Ron Leach film should be a shoe-in for the Festival, so make sure you check it out if...I mean when...you see it on the program schedule. Do not let me down, EIFF!

Last on the docket was the longest short film in contention, Ron Krauss' Amexica, at a lengthy 22 minutes. The recent Golden Palm Award winner at the Mexico International Film Festival was the the most graphic and disturbing entry on the list, delving into the underground world of human trafficking.

Joseph Ferrante and AnnaLynne McCord (of 90210 fame) play L.A. con artists who buy a young Mexican boy (Jordan James) for their get-rich-quick scheme, in which they stage car accidents in order to extort money from innocent drivers. It's a daunting look into a real-life problem, but almost takes it too far, according to the imminent gasps in the room.

On that note we were relieved of our duties. We handed in our ballots & questionnaire, recycled our pop cans, and headed out to the Avenue, somewhere around 9PM.

This was a good thing. Allowing regular folks like myself to pre-screen and basically vote for short film selection into the 2010 EIFF season was a smart move, I think. I hope festival organizers not only continue on this path, but expand its presence in the next pre-season.

Opening night for the EIFF 2010 will be on Friday, September 24, and will run through until Saturday, October 2. I Heart Edmonton will keep you updated on TBD schedules for the event.

We were asked to rate each of the 11 films from one to five (five being the best), with no zeros allowed. Below are the shorts we watched, in order, as well as their running times and the amount of stars I rated each one.

Below is the trailer for Ron Krauss' Amexica.