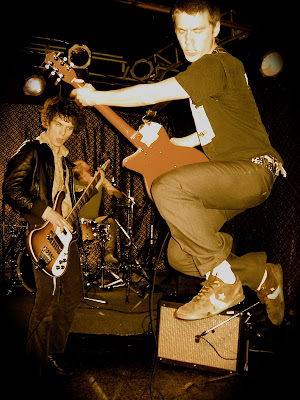 LIKE with Caleb Followill or Ray LaMontagne, it's Eamon McGrath's grating vocals that you first notice when you listen to one of his songs. And when he's fronting one of the many bands he's become associated with, he tears into the mic like it's some bitch that broke his heart.

And like any good artist can, Edmonton-born McGrath is able to veer from manic punk rocker to mellow folksy blues singer-songwriter in the same time it takes for him to put down the electric guitar and sit down to the piano.

But even more impressive is McGrath's undeniable dedication to his craft, compiling more than two dozen self-recorded albums barely into his twenties, including nine in 2008 alone. He records all of his albums at his home in Edmonton.

Compared to the styles of Ryan Adams, Tom Waits, and Black Flag, amongst others, McGrath broadens his musical scope by lending his talents to various backing bands, in The Blackout Begins, The Enemies of England, Peacemaker, and The Wild Dogs. Needless to say, he doesn't have much time set aside for sleeping.

Near the end of '08 McGrath signed on to Toronto-based White Whale Records, and by the following April had launched the singer's compilation set 13 Songs of Whiskey and Light.

One of the tracks that was featured on the anthology disc of his young career is the comparitively melodious "Welcome to the Heart." It's video (below) was directed by Peter Dreimanis and Mike McLaughlin, and was released in the middle of last year.

By the way, McGrath is currently touring across Europe, but will make his way back to his hometown Edmonton on August 28, with a scheduled gig at the Likwid Lounge.