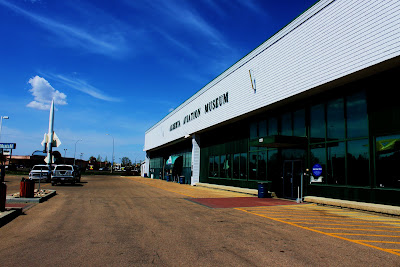 YOU'VE probably noticed the giant aircraft reproductions protruding from the ground every time you drive down Kingsway Avenue, nestled on the southwest corner of the City Centre Airport. But how often have you stopped to see what else lies in the lot? That's what I thought!

But who am I to criticize? Last week was my intro to the Alberta Aviation Museum, which has been up and running since the early-'90s. So, really, I have no excuse, other than lack of awareness and interest. There, I said it!

I'll be the first to tell you that aviation history doesn't exactly spark my attention, but seeing the genuine articles up close & personal was, to say the least, pretty cool.

To be honest, what attracted me to the AAM wasn't its stockpile of more than 30 aircraft on display, or its Cold War jet fighter cockpit experience, or even their multi-screen flight simulators. Nope, it was just another photo op for me.

That's why I headed to 11410-Kingsway Avenue and paid the $9 admission fee, my Canon at my side. The young woman at the front desk gave me a quick account of the blueprints of the nearly 70-year-old structure, which has been declared both a Provincial Historic Site and an Edmonton Municipal Heritage Site. 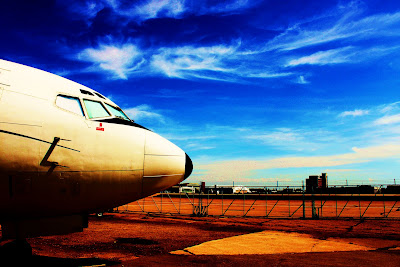 It's owned by the city, and maintained and operated by the Edmonton Aviation Heritage Society, largely relying on efforts by generous volunteers. In fact, it's some of those volunteers who've restored the historic aircraft that furnishes the "last remaining example of a 'double-double' British Commonwealth Air Training Plan hangar," completed during 1942. I'm not sure what that means, but it sounds impressive.

Dozens of aviation exhibits are scattered throughout the giant hangar, including an unapparent corner dedicated to Nazi memorabilia. But the main attractions are the dozens of faultlessly restored aircraft that are, in many cases, generations old.

There's something to be said about standing underneath the colossal propeller of a De Havilland Mosquito, next to the nose of a Barkley-Grow T8P, or even inside a 4-tonne Beech D18S-3NM Expediter. And no, I haven't a clue as to what kinds of histories these planes boast, but they're impressive to see nonetheless.

The first piece you'll notice when walking into the museum also happens to be its oldest in the collection, the 92-year-old Curtiss Stinson Special (1918) (pictured bottom center). Katherine Stinson's custom-built biplane was used to fly the first-ever air mail delivery in western Canada, in a flight from Calgary to Edmonton on July 9, 1918. Stinson was only the fourth American woman to obtain a pilot's license.

Another pioneering plane on display is the Vickers Viking IV, the first amphibian aircraft to be used in Canada, and the first aircraft the Canadian government purchased after WWI, in 1923. There were only eight in all of Canada.

If I'm boring you skim ahead, if you're not already.

But it wasn't all just planes and fighter jets for us to see. Although they took up the bulk of the hangar, the museum also struts a Bell 47G helicopter from 1970, actual engines from these mega machines, an old school emergency vehicle, and even a 1968 Piccard Hot Air Balloon. 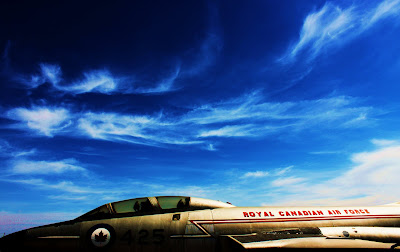 And for those actually interested in the compelling history behind the displays, there's plenty of available info., including engaging videos, cherished photographs, and detailed scripture. The AAM even offers school programs to teach young students aeronautics.

Back to the tour.

Vacant picnic tables aligned one outside wall of the museum, where visitors are welcome to watch incoming and outgoing planes from the adjacent airport.

So there you have it, another of Edmonton's not-so-little secrets, veiled right in the wide open. Next time you're heading down Kingsway Avenue and you see that Beoing CIM-10B Bomarc or McDonnell CF-101 Voodoo simulating take-off, pull into the Alberta Aviation Museum's parking lot and take in some underrated local history.

In fact, what better time to see the AAM than during Airfest 2010, which will be hosted by the museum from Friday, June 25 to Sunday, June 27 (8AM-5PM). Tickets for the event are $20 per person ($35 for couples). For a complete list of the AAM's hours and admissions click here. 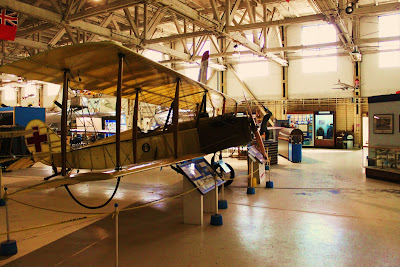