- May 18, 2010
Thousands are expected to take in the summer heat and hip-hop beats during this free river valley concert 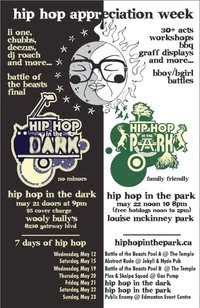 DURING the third week of every May for the last three years, (mostly) local rappers and DJs come together to spit rhymes and spin beats in the great outdoors of the Louise McKinney Riverfront Park. It's called Hip-Hop in the Park, and it's Edmonton's largest locally-organized urban concert.

About 4,000 people are expected to turn out for the free, all-ages show, which coincides with International Hip-Hop Appreciation Week (May 16-23). the one-day-only event is currently put on by the non-profit Hip-Hop in the Park Foundation, which endorses positive, non-violent expression through urban sounds.

These and other acts will be taking to the stage in between an "Open Dance Floor Showcase" (4-4:30PM), B-boy & B-girl battles, break dancing, graffiti writing, and various music workshops, all part of the conclusion to Edmonton's own week dedicated to celebrating hip-hop culture.

Hip-Hop in the Park was inaugurated in Edmonton's picturesque river valley in the summer of 2008, when about 700 folks attended. The following year the audience grew to more than 3,000, and that number is expected to get even bigger for year three.

So if you've nothing to do this Saturday, head down to the Park, just south of the Shaw Conference Centre, and help celebrate Edmonton's own burgeoning hip-hop scene.