A Night of Improv

- April 03, 2010
Local church group Encounter continues to reshape my theories on the pastimes of young Christians... 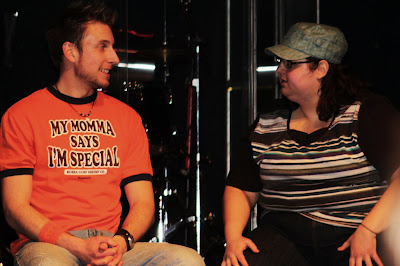 COLIN Mochrie and Wayne Brady they were not, but the DairyFree Drama troupe--named so because they refrain from "cheesy" skits--set aside their inhibitions for two short hours last Saturday night (March 27) to put on a show that could easily stand up to anything the pros could muster...minus all the sexual innuendos of course.

You see, the troupe are also part of Encounter, a Christian group made up of young adults oriented at meeting new people, building kinships, and having a good time to boot. They meet up on a regular basis for various all-permitting events and activities that range from talent shows & sports to their upcoming games night. Most occasions are held at the group's accompanying 9910 Centre, which lies just west of the actual sanctuary itself.

It'd been about two months since I first encountered (sorry, I enjoy puns!) this circle of hospitable churchgoers, when my buddy Andrew Gelasco invited me to check out "Encounter's Got Talent" back in January. To say the least, I was caught offguard by what these mostly 20-somethings had in store for the evening.

But even with that said, I still went into last Saturday evening with blurred expectations. What exactly was I to anticipate from an assemblage of Christian improvisers? Once again, I was unprepared for a night that ended far too soon.

As the spacious 9910 Centre filled up with friends and friends-in-waiting, Encounter organizer Andrea Glen took to the mic shortly after 7PM, letting us know that the show was about to start.

Now, I've seen plenty of skits on that long-lost classic TV show Whose Line Is It Anyway?, but hints of all things non-virtuous ran rampant on the hit series, as foul fabrication customarily poured out from the mouths of Mochrie, Brady, Ryan Stiles and host Drew Carey. In case you're wondering what I'm referring to, refer to the video clip below, featuring the ever-flamboyant Richard Simmons. 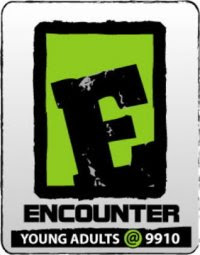 Needless to say--but I'll say it anyways--I knew that that style of improv would be vacant from this stage, but what would take its place? Sketches of divine inspiration? God-fearin' schtick? Skits only "churchies" would find amusing?

No. No. And no! In fact, if I hadn't known preshow that I was amongst patrons of the neighbouring Church on 99, I would've never known these folks were Christian. Consoling news for someone who's never read the Bible or said grace at the dinner table.

But not once did I feel out of place. For the second time now, these Encounter cohorts welcomed me into their at-ease retreat for a night I won't soon forget. And they asked nothing from me in return, but rather extended an invitation to their next outing (April 24). But before I go any further, let's rewind and get back to "A Night of Improv."

Joining Gelasco onstage were Ray Mailman, Ana Elvira, Mike Thibault and the night's organizer Diana Kyle, all of whom shed their restraints for a crowd of 40 or 50 shout-out participants.

For the next two hours or so these five good sports proved improv isn't just good when it's done by the pros, tackling our patience via about a dozen quintessential improvisational tactics, including Freeze Tag, Last Line, Props, Make More Interesting, and the Dating Game.

On occasion we'd yell out suggestions for particular games, and at one point each one of us jotted down a random sentence on a card, in order to make Last Line flow properly. And even though my card never came up (which I have not yet forgiven them for!) the impromptu scripture had us laughing out loud.

And although all five partakers spoiled us with jovial exploits, the Mailman himself seemed to stand out in terms of his familiarity with the stage, a relaxed presence that tended to mask any subtle fumbles he may have had during any of the acts he was a part of. But four more-than-capable co-stars surely fueled Mailman's God-given farce. 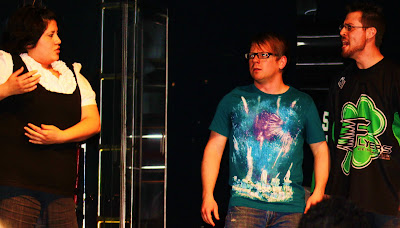 Elvira later admitted to me that this was her inaugural improv experience, which makes her performance that much more impressive. Based on her jibberish romp in the Interpreter game alone, I don't think I believe her. LIAR! And Kyle dominated our attention whenever she sampled a skit, escalating every sketch to its comical potential...and somehow, without any curse words!

Confidence, nor comprehension, never eluded Thibault, who's precise timing highlighted his contributions that night, though it was simply his comedic savvy that flattered his "scenes," such as when he summoned an enthused TV evangelist in Dating Game. We'll just have to forgive his poor taste in hockey jerseys! I'm just kidding by the way, so please don't send me any letters.

And because Gelasco is both a friend and a co-worker of mine, I can't help but feel biased over what I say about his performance, so I'll just say this: don't quit your day job. I joke! In all seriousness, Gelasco looks right at home onstage, able to compliment his slapstick sidekicks with a talent that is, as his T-shirt claims, "special."

It was a shame the show finished shortly after 9PM, but all good things must come to an end. For the next little while I got to know a few of the other Encounterites (Hey Danielle! What up Drea? Looking good...ah...actually, I forgot your name!).

I downed the last of my iced cappuccino (all rights reserved) and headed home from there, more than satisfied with my decision to check the "Yes" button on the Facebook invite. Feels like deja vu!

If you're interested in finding out more about Encounter and who they are, you can join their Facebook group, and anyone is welcome to check out Encounter's weekly improv skits (with revolving casts) each Monday at the Church on 99 (9910-67 Ave.).
Ana Elvira Andrew Gelasco Church on 99 DairyFree Drama Diana Kyle Encounter improv Mike Thibault Ray Mailman