WHAT I'm about to tell you may shock you. It might anger you. It may even make you want to grab your computer screen and toss it across the room into your pile of I Heart Edmonton memorabilia! Ryan Jespersen, charitable & personable co-host of Citytv's Breakfast Television, is a Calgarian!!

That's right, born and raised in our southern rival, yet living among us! But before you start your online petitions, you should know something else about Mr. Jespersen. He's come to love Edmonton just as much as we do.

In fact, you might even call Jespersen, 33, an ambassador of our city, taking every opportunity available to promote and/or celebrate all the fascinating locals and the countless things to see 'n' do in Edmonton.

"I try to reflect what people want to see in their city," Jespersen told Avenue Magazine, which last year chose him as one of their "Top 40 Under 40" Edmontonians making our city a better place to live. "[Breakfast Television] allows me to connect with the community in a grassroots way, which is incredibly enriching, both in a professional and personal way."

Jespersen's infectious personality and generous spirit runs rampant on the show, which I tune into every morning before I head to work. He's also been known to use the time to spread the word of causes that are close to him, including Movember, World Vision, Sorrentino's Compassion House, and the Special Olympics.

Although his official title would read something along the lines of broadcast journalist or television host, it seems that he'd be better described as a humanitarian who involves and informs Edmontonians in his spare time. But I'm sure the title he'd be most proud of would be husband, to the beautiful Kari Skelton.

Jespersen popped the question on the steps of the Alberta Legislature, four years after the couple first met as competing political reporters. Skelton, who also co-hosts a morning show on 96.3 Capital FM, said 'yes,' and they were married last year in Costa Rica.

But enough of that mushy stuff, let's get to know what the happy husband thinks about his honourary hometown. Let's spend a few minutes with...Ryan Jespersen. 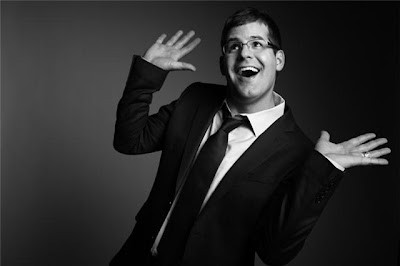 1. What is one thing about Edmonton that you think stands out from other Canadian cities? "I once heard Edmonton described as 'the biggest small town in Canada.' While you could dispute the small town tag, I think the spirit of that statement holds true. In contrast to the bitter cold that all too often defines our city, there's a certain warmth that characterizes how Edmontonians treat both visitors and each other."

2. Do you have a favourite place to visit in Edmonton? "I have dozens of favourite places in Edmonton! The Legislature grounds year-round. The river valley trails in early autumn. Whyte Avenue on a lazy weekend. Numerous soccer fields and golf courses. Sugarbowl. Culina. Blue Plate Diner. Skinny Legs and Cowgirls. Lux Steakhouse. Madison's Grill. Hardware Grill. The Citadel Theatre on opening night. Churchill Square in the middle of July. The Winspear. The U of A in early September. Sherbrooke Liquor's beer aisles. The roof at the Black Dog. The Walterdale Theatre. The beer gardens at the Edmonton Indy. Rexall Place on 'Hockey Night in Canada'."

3. What local festival do you look forward to the most each year? "No question-the Fringe Festival. It's tough to beat the combination of excellent theatrical productions, varied festival offerings and summer temperatures! Honourable mention to Ice on Whyte."

4. If there was one thing you could do to improve Edmonton, what would it be? "I'd like to see the east end of Jasper Avenue looking like it deserves to look!"

5. Whyte Ave. or Jasper Ave.? "Even though I live a block off Jasper Avenue, I have to go with Whyte Avenue. Jasper is packed with potential-for the most part, Whyte is already there."

7. If you had to sum up the city of Edmonton in three (or five!) words or less, what would they be? "(Still the) City of Champions.

(Redefine what it means to be a Champion. Sporting achievements qualify but don't own the category. Edmonton boasts Champions in science, technology, medical research, industry, and the arts. Let's celebrate all of our city's crown jewels!)."

Below is some footage featuring Breakfast Television hosts Ryan Jespersen and Bridget Ryan doing what they do best, in the form of their regular segment 'Say What?!'