THE Art Gallery of Alberta (AGA) is pleased to announce six dynamic summer exhibitions that will feature remarkable art from our region, the country and around the world. The new exhibitions will explore the past, present and future of Alberta art, trace the career of one of the most recognizable printmakers of the 20th century and stir the imaginations of both young and old. 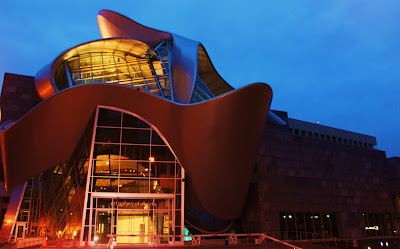 "Building on our remarkable opening, the Gallery staff continues to seek out and present the best art from our region, Canada and beyond," says Gilles Hèbert, AGA Executive Director. "We intend to build on our amazing momentum. Forget going to the movies...the blockbuster this summer is the AGA."

The three floors of exhibitions continue to demonstrate the AGA's commitment to presenting the highest calibre art in its role as a Gallery of national significance. Opening May 29, 2010, "Timeland: 2010 Alberta Biennial of Contemporary Art," will feature works by 24 established and emerging Albertan artists; also opening, the premiere of "Sandra Bromley: Fire." Three weeks later, on June 19, 2010, "M.C. Escher: The Mathemagician" (pictured below), "Piranesi's Prisons: Architecture of Mystery and Imagination" and "The Art of Warner Bros. Cartoons" will open. Rounding out the summer schedule is "Reframing a Nation: The Poole Donation to the Art Gallery of Alberta," an exhibition showcasing works from the AGA's permanent collection, opening June 26, 2010.

Catherine Crowston, AGA Deputy Director/Chief Curatri, underscores the significance of these exhibitions. "The AGA is committed to developing new exhibitions for our audiences and to bringing travelling exhibitions to the Alberta public. Our summer line-up celebrates both creativity of Alberta artists and shows that over the centuries and across countries, artists are inspired by each other and fuel our imaginations."

When it opens in late May, the "Alberta Biennial of Conteporary Art" will be the 7th incarnation of this unique initiative in Canada, which brings national attention to the Alberta arts scene. The "2010 Alberta Biennial" will feature a cross-generational selection of 24 artists from across the province. "Timeland: 2010 Alberta Biennial of Contemporary Art," the title, emerged as Curator Richard Rhodes, the Editor of Canadian Art Magazine, selected the artists and works from the more than 200 submissions.

Rhodes could not ignore the effect the geography of Alberta had on its residents and artists. The exhibition will occupy all 6,000 square feet of the third floor gallery space with pieces ranging from sculptures, photography, film, music and textiles from artists like Lethbridge's Cedar Tavern Singers and Edmonton's David Cantine. A complete list of artists can [be] found at youraga.ca. The exhibition will run until August 29, 2010.

Also opening at the end of May, "Sandra Bromley: Fire," in the RBC New Works Gallery. Bromley is known for her collaboration with Wallis Kendal on "The Gun Sculpture," which has shown at the Edmonton Art Gallery, the Canadian Pavilion in Germany at Expo 2000, in the Nobel Prize exhibition in Seoul, Korea, the Canadian War Museum in Ottawa, and finally, at the United Nations Headquarters in New York. In this exhibition, the Albertan artist continues her anti-war discourse. "Sandra Bromley: Fire" is the premiere of an installation comprising of video-portraits, altered ready-mades, light-boxes and neutralized rifles, representing victims of violence from Sierra Leone conflict zones. It will be on display May 29-August 2, 2010.

Opening in mid-June are two exhibitions presented as part of "The National Gallery at the Art Gallery of Alberta," with the support of "Capital Powered Art," an exhibition series sponsored by Capital Power Corporation. This unique partnership brings important art from the nation's collection to Albertans. For summer 2010, the AGA will present "M.C. Escher: The Mathemagician" and "Piranesi's Prisons: Architecture of Mystery and Imagination." 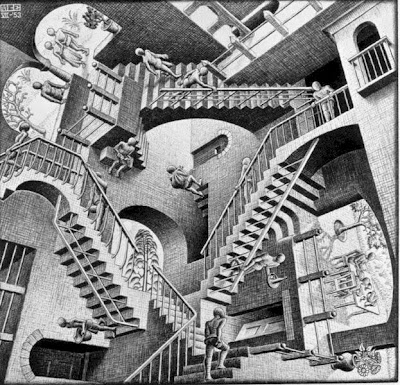 Curated by Crowston, "M.C. Escher" runs from June 19-October 11, 2010. It will feature 54 works selected from the National Gallery of Canada collection, including world famous works from the "impossible architecture" series and other iconic images. This exhibition offers a unique look at the span of Escher's career and includes his early Italian landscapes along with many of his most recognizable images.

Giovanni Battista Piranesi's haunting architectural fantasies ("Carceri d'invenzione") will be featured in "Piranesi's Prisons: Architecture of Mystery and Imagination," running June 19-November 7, 2010. Published in 1749-1750 and again in 1761, the works continue to rouse the imagination of artists and architects alike.

"The Art of Warner Bros. Cartoons" traces the development of the studio's cartoon stars, providing a step-by-step breakdown of how classic cel animation crafted by the Warner Brothers Studio between 1935 and 1964. The exhibition runs June 19-October 11, 2010.

Rounding out the six summer exhibitions is "Reframing a Nation," running June 26-November 7, 2010. The exhibition will explore the myths about Canada, shaped through the collections of Canadian museums. The exhibition draws on the large donation of art to the AGA by the Estate of Ernest E. Poole in 1975.

The AGA will continue to offer its diverse array of exciting public programs for families, youth and adults. Highlights include "Animation Week," featuring a talk by Emmy Award-winning Gary Panter, head set designer for the TV show Pee Wee's Playhouse on July 8; "Refinery," the second AGA late night art party on July 10; curator's introductions to exhibitions; a closing party for the "Alberta Biennial" featuring Cedar Tavern Singers in late August; a screening of Warner Bros. cartoons and a talk hosted by Gene Walz in September, and an art-inspired book club. A fresh line-up of art classes for kids, youth and adults, inspired by new exhibitions, will also be offered.

For more information on the AGA's upcoming exhibitions and related programming, please visit our media room.

*Sarah Hoyles is not an actual contributor of I Heart Edmonton, but rather the Media Relations & Communications Coordinator for the Art Gallery of Alberta. The above post was a media release issued by the AGA on April 1, 2010.