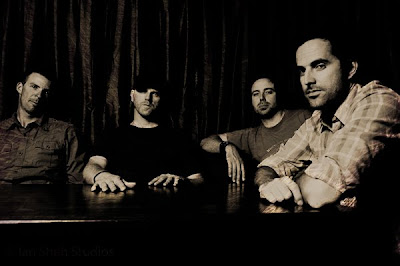 "FROM the very beginning, the first songs possessed a haunting quality, dark subject matter and melodies that wouldn't get out of our heads," said The Wheat Pool's Robb Angus (vocals, bass, guitar), explaining the Edmonton band's sophomore album Hauntario (2009).

Guitarist Glen Erickson added, "Ontario wouldn't go away, as a lyric, as a destination, or as the home base in our industry. For a western band it remains a necessary evil, a difficult girlfriend to win over, yet on a different level it possessed so much of what we love about our country."

According to the band themselves--also featuring drummer Stephane Dagenair and Robb's brother Mike Angus sharing vocals, guitar and bass--Hauntario picks up where their acclaimed debut Township (2007) left off. Part of that is because both records were helmed by the same production team of Edmonton singer-musician James Murdoch (the "Canadian John Mayer") and Captain Tractor vocalist Chris Wynters.

One of the tracks on the 11-song Hauntario set is "This Is It," which the band made a video for late last year, courtesy of Shameless Records Canada. "This Is It" is our Music Clip of the Month for April 2010. You can hear more songs from The Wheat Pools by checking out their MySpace page.

Keep your eyes peeled for when the clip reaches 2:58, which I Heart Edmonton is debating whether to take to the courts or not. We're gonna sue the pants off of "I Heart Old Strathcona"! How dare they?!!