"INSTANT teleportation," answered Brittney Le Blanc, when The Unknown Studio asked her what "super power" she'd prefer most. "I wouldn't have to worry about parking, I'd get more sleep, I'd cover WAY more news and stories...I'd be unstoppable. Plus, I could travel more." 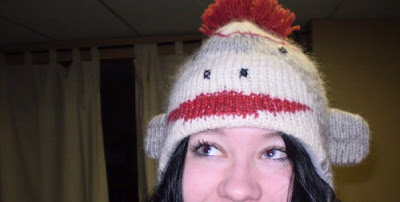 That says a lot about Le Blanc, a local media "wonderkid" and prolific Twitterer who's lived in Edmonton all her life. She works long hours, enjoys covering the goings-on of our mutual hometown, and seems to know everyone who is anyone in it. Seriously! I've seen photos of Ms. Le Blanc posing next to software developer & fellow social media guru Mack D. Male, Olympic gold medalist Kevin Martin, and even Alberta Premier Ed Stelmach. Nice!

The former NAIT student (Radio & Television Arts) has spent the last four years working in the radio trade, writing, reporting, editing, and even sporadically on-air announcing for iNews880 AM, Edmonton's only all-news station.

Le Blanc also writes a popular blog for the iNews' online facet, including a regular segment called "Get to Know an Edmontonian," which is actually kinda similar to this here feature of I Heart Edmonton. (I swear we didn't steal the concept from you Brittney!). Some of those locals she's gotten to know over the last seven months have included traffic reporter Ryan Peterson, radio host Desiree Schell, financial advisor & Avenue Magazine coverboy Cary Williams, aspiring actress Marley Groeneveld, and filmmaker-in-training Tyson Lenz. See, I told you she knows EVERYone!

But Le Blanc does so much for our city, as an advocate and enthusiast, and I Heart thought it was time to learn more about her for once. So, we asked her a few questions about what she thinks about the very city we've both come to love.

And now, on to the questions...

1. What is one thing about Edmonton that you think stands out from other Canadian cities? I blogged about this at the end of 2009, and it remains true. Edmonton has a very, very successful Twitter community. Why? Perhaps it's in the water. I personally think it's something that's always been there, but it's just a little more prevalent with the social media scene.

Edmonton has always been a very giving community. You see that any time you're involved with a local charity or volunteer organization. When push comes to shove, if you ever need anything, Edmontonians are there for you. We're a city filled with friendly, giving, and frankly-lovely, people. I'm not afraid to say it Edmonton, I love you! We're a small town living in a big city.

2. Do you have a favourite place to visit in Edmonton? I have to pick ONE? This is ridiculously hard. I guess I'll have to go with one of my absolute favourite things in Edmonton: the High Level Bridge. Seriously. I love that bridge. The architecture, the scenery around it is breathtaking. I can stand on the bridge for hours looking at the River Valley, Legislative grounds, the river.

The majestic waterfall flows from the bridge, and a streetcar rides above it. It's a great use of space, and will hopefully last for generations to come. Plus, I've secretly wanted to race glowsticks in pop bottles from there to the Walterdale Bridge for years now. (But I don't, because that would be polluting). It's also close to both Jasper Avenue and Whyte Avenue...so if you're on the High Level Bridge, you're close to tons of great little shops and watering holes.

3. What Edmonton festival do you look forward to the most each year? To be honest, I don't get to attend many festivals-I'm usually working. But I do occasionally get to head out and see bits and pieces while I cover them. If I was attending, I think it would be a tie between the Fringe and the Winter Light Festival. Both offer a variety of things to do, see, and experience.

4. If there was one thing you could do to improve Edmonton, what would it be? A better transit system and more, reasonably-priced parking.

5. Whyte Ave. or Jasper Ave.? Why are you making me choose? I live and play on Jasper Avenue, I love it-I think it depends on what you're looking for. There are great watering holes and shopping on both sides of the river...but Whyte Avenue might edge win [sic] for me. There's more of a nightlife on Whyte Avenue, shops stay open past 6PM (shocking!) and there is better parking.

I seriously am usually not such a fence sitter.

Okay, so maybe I spend most of my radio time listening to CISN Country. What can I say? I love country music and have listened to CISN since I was very, very small. '90s country has a special place in my heart.

7. If you had to sum up the city of Edmonton in three words or less, what would they be? Culture. Technology. Fabulous.