@ the Movies/ The Crazies

HORROR movie remakes are a dime a dozen these days, as Hollywood alum continue to rehatch familiar stories of slash and gore for a new generation of moviegoers. The concept has its highlights, but for the most part these films simply borrow infamous cinematic characters to evoke nostalgia...and ticket sales! 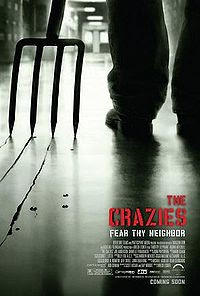 In fact, ever since director Marcus Nispel and producer Michael Bay resurrected Tobe Hooper's 1974 classic The Texas Chainsaw Massacre in 2003, movie studios have been busy ransacking the archives of Hollywood's horror genre, buying up the rights to reimagine the next slasher franchise. Nispel's slick remake opened at No.1 shortly before Halloween of '03 and earned more than ten times its budget, thus inspiring many more similar horror movie treatments over the next seven years.

In addition to those and a handful of others, Hollywood is already planning further updates, of Hellraiser, Child's Play, The Howling, Pet Sematary, It, Invasion of the Body Snatchers, and many others. And I'm sure that, in about 10-20 years, we'll be exposed to trailers of the new remake of Saw, The Grudge, or even a remake of The Texas Chainsaw Massacre remake! It's just a matter of time.

One more you could add to that growing list is The Crazies, based on Romero's 1973 feature of the same name. Breck Eisner's $20 million reboot, which credits Romero as executive producer, starts off well enough, at a high school baseball game in small-town America (Ogden Marsh, Iowa, actually).

Timothy Olyphant (Scream 2, Hitman) is Sheriff David Dutton, who is taking in the game when he notices something strange on the field. One of the town's people stumbles into the outfield, all zombie-like, gun in tow. It's a crazy! Dutton's hands are tied--not literally of course--and he's forced to shoot the man dead, as the crowd looks on.

From there it's mostly a downhill ride of foreseen and just-in-time moments as the Sheriff and his wife, town doctor Judy Dutton (Silent Hill's Radha Mitchell), try and figure out what's infecting their neighbours.

Spoiler Alert! It's only after they discover that another neighbour has set his own family on fire that they realize there's gotta be something in the water...and I actually mean literally this time. You see, the Sheriff and Deputy Russell Clank (The Ruins' Joe Anderson) luckily unearth a military plane in the town's water supply, and after another lucky break discover that the aircraft was stocked with a toxin that causes people to behave impassivly agressive towards others, before they're engrossed in belligerent rage. In other words, they be crazy!

But at times it became difficult to pinpoint what these crazies actually were. Some seemed like demonic psychopaths with an eerie disregard for human life. Others seemed like flesh-eating zombies.

Either way, Eisner infused genuine tension sporadically, such as in the car wash scene, but convenience and luck played too big a role in this rather dull 100-minute waste of time. I've seen most of this stuff before, several times actually, in many other movies--and I'm not even referring to the 37-year-old original.

Eisner coulda used some originality himself, as I called most outcomes in my theatre seat, including when the movie wrapped up with the possibility of a sequel. But that possibilty depends on us, the audience, and whether or not we make The Crazies successful enough to warrant one. Let's not make that happen people.

The funny thing is that this remake could use a remake of its own, and one that doesn't just borrow an already developed script as an excuse to sneak in a quick buck at the box office.

The video below is the trailer of Breck Eisner's The Crazies.