- March 01, 2010
During the Olympic Games Edmonton area athletes reminded us why we're called the 'City of Champions'

I'VE never really watched past Olympics, Winter or Summer, and I had no intention in starting with the 2010 Games in Vancouver. But, like so many fellow Canucks, I was drawn into the spectacle that would connect a whole nation like nothing before it had. 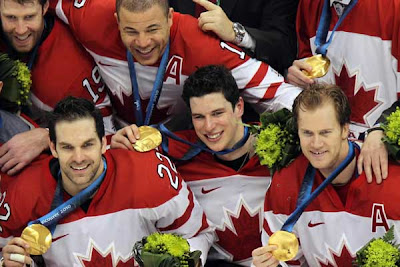 Patriotic Canadians from coast to coast revelled in every bronze, silver and gold medal victory of our hometown heroes, themselves fuelled by a united pride that caught many of us--and outsiders alike--offguard.

For seventeen days, millions were glued to TV sets as we not only ended our dubious distinction of being the only country not to earn a gold medal on home turf, but went onto win a record 14, more by a single country in any previous Winter Olympics ever! By Sunday (Feb. 28) Canada had logged 26 medals in all, enough for third place, behind the U.S. (37) and Germany (30).

Some of those medals were captured by determined athletes from the Edmonton area, reminding us why we adopted the "City of Champions" moniker many years ago. And I know that many Edmontonians have grown tired of the nickname, but if the shoe fits....

It started early in the Games when Spruce Grove's Jennifer Heil became the first Canadian to win in Vancouver. The freestyle skier took home a silver medal in ladies mogul on Feb. 13.

Edmonton's Jessica Gregg shared another silver medal with a trio of Quebec speed skaters, coming behind only China in women's 3,000-metre short track relay on Feb. 24.

Kevin Martin of Edmonton led his four-man team (including St. Albert's Marc Kennedy) to gold in men's curling on Feb. 27. And on the final day of the 2010 Winter Olympics (Feb. 28) the men's hockey team--including St. Albert's Jerome Iginla--took the gold from the U.S. (3-2). Iginla assisted in the game-winning overtime goal by Sidney Crosby.