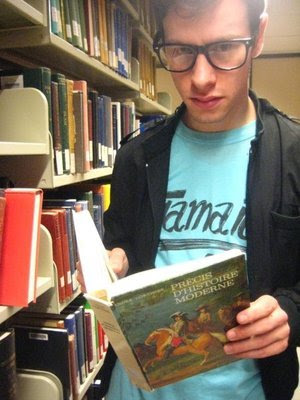 "IT'S an amazing, amazing scene," admitted local rapper Joe Gurba (a.k.a. The Joe) to Vue Weekly, referring to Edmonton's hip-hop scene. "There are MCs here that can go up against any international MC. But there are no listeners."

"I don't even listen to hip-hop that much anymore."

That was more than two years ago, and both hip-hop in Edmonton and The Joe have come a long way. In fact, our city's current poet laureate just happens to be rap artist Cadence Weapen, and some of the genre's biggest players have passed through (or were at least scheduled to) our rock 'n' roll town.

But we're getting off topic here, so let's get back to this Joe guy. First off, who is he? Well, according to his MySpace page, The Joe is a 22-year-old emcee, poet and producer who sounds like "Fresh Prince meets Leonard Cohen." Actually, that isn't too far from the truth!

Last September The Joe dropped his second album, Ut Oh, which he released under his own imprint Old Ugly Recordings Co. He started the label to allow others in his shoes to make the records they wanted to make, but also to build a publishing company to stockpile his own and others' music and poetry.

His lyricism steadily references Edmonton and religion, though not so much that it might intimidate any mainstream groupies. Edmonton, on the other hand, is unavoidable in The Joe's "You're Cool," which we've posted below for your convenience (watch for Gord Steinke).

If you dig "You're Cool," then I highly recommend you head over to The Joe's MySpace page and click the 'play' icon for "Apathy"...it's far better than any major-label efforts I've heard of late.

Luckily, you can see the man himself in person this Tuesday (March 9) at the Starlite Room, where he'll open for The Beat Nuts. You can also follow The Joe on Facebook or purchase Ut Oh by clicking here.