e
More than any other major city in Canada, Edmonton has become synonymous with oil and the prosperity that tags along with it, even earning the nickname "oil capital of Canada" during the 1940s. The oil boom of central Alberta was also the subject of controversy in the region, due to environmental issues and the demolishing of early buildings to make room for modern high rises and skyscrappers in the 1960s.

Since oil was first discovered in Leduc (33 km south of Edmonton) on February 13, 1947, our city experienced major growing pains, as population went from 149,000 to 269,000 during the 1950s alone. A resurgence in 1973 followed a decade of lowered interest in the region's oil reserves, and then another blitz during 1979's Iranian Revolution, just as the aptly-named Edmonton Oilers joined the National Hockey League.

Our latest oil boom hit a brick wall during the great recession of '08, after it was ignited in the late '90s. But there's no doubt that Edmonton and the rest of the province will continue reaping the benefits--and the repercussions--that come along with oil.

Pumpjacks like the one in the photo below are dispersed throughout the outskirts of town, reminding locals of Edmonton's legendary history with the black gold. 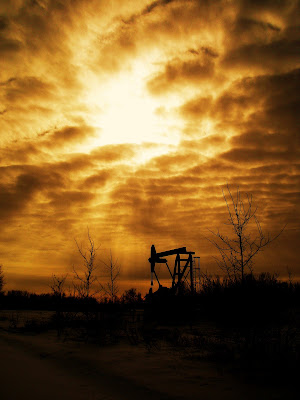