- October 25, 2009
Not since The Blair Witch Project has a movie forced so many unsuspecting viewers to sleep with the lights on 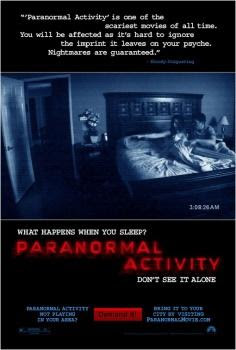 TOSSING and turning in my bed, alone at night, I kept imagining that some alter-dimension entity would tug my shielding blanket from my grip and then toss me around the room at its disposal. That's how I slept the night I paid 12 dollars and 50 cents to see Paranormal Activity at the Scotiabank Theatre (West Edmonton Mall), the only one in the city playing the do-it-yourself terror flick that was made for a reported $15,000.

Israeli-born filmmaker Oren Peli (2010's Area 51) directed, scripted and even edited his cinematic inauguration, which is being hailed as the suburban Blair Witch Project, due to their familiar style of shooting and techniques.

The one-time video game designer filmed the entire 86-minute movie at his own home in San Diego, using a hand-held home video camera to offshoot expenses and, of course, to induce an atmosphere of plausibility and authenticity.

Katie (Katie Featherston) is a college student living with her boyfriend Micah (Micah Sloat), a day trader, in a humble 2-story tract house in the suburbs of San Diego. We learn that since the age of eight, Katie has been haunted by something that can't easily be explained away, but the malevolent entity comes and goes for any given period of time. Well, now it's back, and an unconvinced Micah is determined to capture its exsistance on his new video camera.

Over the coming weeks the demonic phenomena terrorizes the frazzled couple, tip-toeing on their nerves before menacing their--and the audience's--most internal fears, captured in a rawness that only amplifies the tension.

"[Oren] Peli preys on our humanistic vulnerabilities...and sets the tension for every ordeal with a minimalist musical note that arouses a parade of goose bumps before each fear-mongering climax"

Slamming doors, flickering lights and loud thuds in the middle of the night escalate into eerie visions caught on film when Micah decides to position his new camera on a tripod situated near the foot of their bed. Its abrupt ending was unsettling, not because it left loose ends, but rather because it stretched beyond just an ominous chill unlike almost any Hollywood creation in the "horror" section at your local Blockbuster. Its unnerving realism is its most sinister trait, proving that the director had done his homework in evoking fear out of an audience. 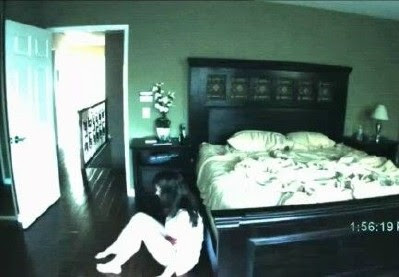 Like the filmmakers did with The Blair Witch Project, Peli cast unheard-of actors for Paranormal, and relied on their improvisational skills to gap the bulk of the film's dialogue. And, as in Blair Witch, onscreen scripture fills us in on the rest of the story, representing that this footage was found and is being screened for our own amusement, sorta. It's all very believable, almost too familiar for comfort, but right on target of Peli's overall view for the project.

Peli preys on our humanistic vulnerabilities, tests our imaginations to fill in what we never get to see, and sets the tension for every ordeal with a minimalist musical note that arouses a parade of goose bumps before every fear-mongering climax.

The hype that preceded Paranormal Activity's wide release was both credible and legit, enticing us as "one of the scariest movies of all time." I bought in, and so did $50 million worth of ticketholders (so far) who've made this sleeper hit one of the most profitable films in history. I can assure you that if you go see this movie you'll get what you came for. What I cannot assure you is that you'll get to sleep that night.

Click here to see when and where Paranormal Activity is playing in Edmonton. Below is the film's trailer, courtesy of YouTube.
e

e
Below is one of the alternate endings that were never seen in the theatrical version of Paranormal Activity. In fact, the ending you'll see in theatres is the one thought up by Steven Spielberg, who jumped on ship in 2008. This particular ending, courtesy of YouTube, was used when the film was first screened at the 2007 Screamfest Horror Film Festival.
e