- October 18, 2009
The living dead and psychologically-challenged make for one hell of a good time at the country's best fest of its kind 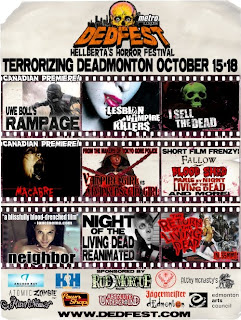 DO you enjoy watching decapitations in slow motion? How about reanimated corpses snacking on fresh "BRAINS"? Perhaps you're into gory torture scenes that test your gag reflexes? If you answered 'yes' to any of these questions, then you're either demented like myself or you'd be a shoe-in for Canada's premier horror film festival, DEDfest, which runs through until this evening (Sunday, Oct. 18).

Friday night was Day 2 (of 4) of DEDfest, which is the reincarnation of last year's Deadmonton Film Festival, a gathering of horror movie fans that went "on hiatus" when co-founder Matt Acosta decided to pursue filmmaking on a more full-time basis. The news left me balling on my bedroom floor, screaming "Why?! Why?!" at the top of my smoke-cloaked lungs, clenching my reddened fists at the Lord's cruel joke! Okay, maybe the news wasn't that dramatic, but still...it was a loss for the atypical arts community in Edmonton, one that finds solace in the few events such as this one that depart from all the other shindigs that hit town each year.
It must've been just a few weeks later that a buddy of mine confirmed that although Deadmonton would R.I.P., DEDfest had come to fill the void. Organizers Kevin Martin (who owns The Lobby on Whyte Ave.) and Derek Clayton resurrected the festival just in time for the Halloween cycle, debuting Thursday night (Oct. 15) with features I Sell the Dead and Lesbian Vampire Killers.

Friday evening I met up with a couple of friends at Edmonton City Centre for a quick bite, then headed over to the Citadel's Metro Cinema, where organizers were setting up beer and merchandise vendors. Actually, it was a couple of fold-away tables selling Kokanee and Heineken, T-shirts and affiliated nic nacs. The doors opened shortly after 6:30PM and we went in to find a trio of seats ($20) in the third row of the Metro, which also hosted last year's Deadmonton Festival.

Martin and Clayton took to the stage to introduce themselves and to welcome the anxious crowd to the 5-hour showcase, which kicked off with a short film called Thirsty. Directed by Andrew Kasch (The Fall) and based on a short story by Joe Knetter (Terror Overload), Thirsty starred Joe Lynch (Wrong Turn 2 director) as a road tripper dying to quench his thirst with a cold cherry slurpee, but a series of hurdles prevents him from just that. To be honest, it was probably the night's best piece. 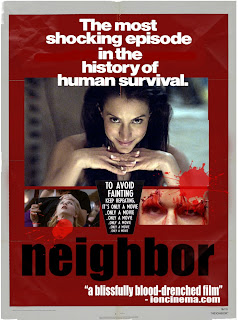 "The most shocking episode in the history of human survival!" That was the tagline for the next film on the docket, an embarrassingly bad feature written and directed by Robert A. Masciantonio (All Along), called Neighbor (pictured right). But star America Olivo (Friday the 13th) was no girl next door, getting off on torturing suburbanites before setting up camp in their homes.

Neighbor had its moments, don't get me wrong, but the gore fest didn't know when to quit, relying on shock value and our gag reflexes to keep us tuned in rather than a plausible storyline or believable acting. The film, which also starred Neve Campbell's younger brother Christian Campbell (The Betrayed), shot off the brutality meter during one particular scene that involved a stick-like device and Campbell's penis...that's all I'm gonna tell you. Overall, I just didn't get it.

After a 20-minute intermission Clayton returned to the stage, this time with the first-ever crowned Miss Deadmonton, Joey Tramer, who briefed us on what to expect for the rest of the evening. Next up, at around 9:30PM, was the locally-shot Escape from Death Planet, a 5-minute short that isn't even worth the time to talk about...sorry to be so malicious, but geez, it was that bad!

The 15-minute follow-up, Fallow, was scripted and co-directed by Edmonton writer Dave Alexander (Rue Morgue Magazine), who wrote of a small Prairie farming community that sacrifice the living in order to appease whatever being they believe allows their crops to prosper. A decent effort, I guess, but rather forgettable at the same time.

"Although the name has changed, Edmonton's horror film fest was just as satisfying, if not better!"

The subsequent short, Deadwalkers, was a definite step-up from Death Planet and Fallow, coming in at less than a half-hour. The Calgary project, directed by Spencer Estabrooks, is a zombie western with the potential of extending into a full-length feature, but probably never will. 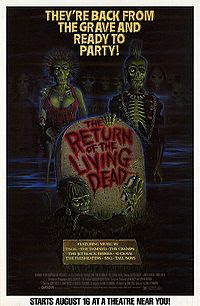 In between these films DEDfest offered up some hilarious horror-genre trailers, some of which were spoofs and others that were legit films, but who's trailers have inadvertabtly become laughable with age. One of the latter was Savage Streets (1984), starring Linda Blair as a bow-and-arrow-weilding vigilante, clad in leather and a bad '80s hairdo. Another special treat was Adam Green's 3-minute Jack Chop, a parody of the infamous Slap Chop ads that stars overly-excited pitchman Vince Offer (ShamWow!). This hilarious spoof, which could easily fit in as a MadTV skit, is full of foul language, so don't say I didn't warn ya in case you wanted to check out the clip at the bottom of the article.

At about 10:30PM the final film had begun to roll, in Dan O'Bannon's "classic" horror comedy The Return of the Living Dead (1985), starring a long list of nobodies. The retro pick picked up from where George A. Romero's Night of the Living Dead (1968) left off, kinda, poisoning itself with every '80s clichè imaginable. This screening was the first time the film had been shown in its original 35MM format in 24 years!

On the eve of midnight the audience left their seats, shoving past empty beer cups and half-full popcorn bags left in the aisles of the Metro. Although most of the films of the Friday night line-up kinda sucked, half the fun lied in their imperfections. Plus, how often is it that we get to sip on beer (or in my case, Red Bull) in a movie theatre...legally, that is?!

Although the name has changed, Edmonton's horror film fest was just as satisfying, if not better. And like the hundreds of folks that enjoyed the fest over the 4-day weekend, I'm already looking forward to next year's line-up.

Below is the 1985 trailer for Dan O'Bannon's The Return of the Living Dead, as well as Adam Green's comedic short Jack Chop (both courtesy of YouTube):