- October 04, 2009
124th Street discreetly hosts a buzzing community of restaurants, specialty shops, galleries, and this cyber cafè with a few secrets of its own 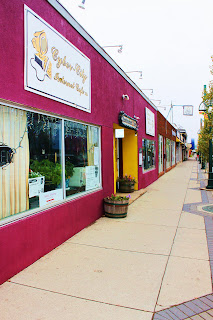 Two years before Edmonton was proclaimed an official city, its current West End was just starting to take shape, after Scotland-born farmer Malcolm Groat (yes, that Groat) sold his 900 acres to real estate promoters in 1903. Surrounding areas such as Glenora and Groat Estates congregated to what was known then as Edward Street, as the region's central shopping hub. Today, this bustling community is simply recognized as 124th Street, and it remains that cultural core a century later.

It was only recently that I truly got to appreciate the potpourri of 124th Street, a small section of a large town that could easily be Whyte Ave.'s baby brother, who is usually left on the sidelines as Mommy & Daddy focus all their attention on his older and more popular sibling. In terms of patronage, 124th has a long way to go before he can try on his older brother's shoes.

That's not to say the humble strip doesn't have its worthy contributions. It's home to the marquee-accentuated Roxy Theatre, one of the city's trio of Koutouki Greek eateries, and some of the modest art houses that make up the famed "Gallery Walk." Amid all the hoopla are unique boutiques, fine salons and unpretentious drinking establishments, but our focus will be on one of the spots that lies somewhere in between the aforementioned and the unmentioned pawn shops and cheque-cashing outlets that share the overlooked street.

Conrad's Sugar Bowl Coffee House & Juice Bar/Cyber Cafè is situated directly across the lane from Koutouki. It's stale exterior left much to the imagination, and although it tries to come into its own once inside, fails to capture any specialized glory to brag of. From the moment I stepped foot into Conrad's Sugar Bowl I knew something was off, not necessarily in a negative sense, but there was something out of the ordinary here that I couldn't put my finger on.

The first thing you notice when walking through those obtrusive yellow doors is a few racks of local and regional newspapers and magazines that are free for the taking. To the right was the dining area of the restaurant & bar, outfitted with mismatched furnishings and a giant wilderness mural. There was also a rather large selection of teas to choose from, next to the kitchen entrance. A pair of ladies sat at one of the bench seating areas that aligned the windows, which looked out to the street and right into Koutouki, where a group of possibly-tipsy patrons began dancing on the sidewalks, in celebration of some special occasion.

"To be blunt, he had boobs! Yes, that's right, the guy had a rack, and I'm not suggesting a pair of old-guy man boobs, but rather tits that must've been in the C-cup vicinity!"

To the left was the bar, another one of those forest murals, and about a half-dozen computers ($6/hr.) that made up the "cyber" portion of the "cafè," one of which was occupied by a gentleman minding his own business. A quick glance around the oddity of a tea parlour & cocktail lounge revealed chalk board menus, Christmas lighting, and retro signs that read things like "Alcohol-I only drink to make you more interesting!" and "Drink coffee-do stupid things faster with more energy."

I sat at one of the bar stools and ordered a Jack Daniels ($4.75), which the young bartender topped off with crushed ice and a can of Coke he snatched out from one of those huge floor freezers that you'd find keeping popsicles and ice cream cold in convenience stores and gas stations.

I sipped on my Jack and skimmed through one of the freebie periodicals, but kept poking my head back up at the randomness behind the bar. There was a tape deck and record player sitting on one of the shelves, sharing space with cassette tapes, DVDs and books like Bartending for Dummies and Cocktail Parties for Dummies. Not very reassuring, I must say!

Now don't think I was awe-struck or offended by this imagery, because it's quite the opposite, really. This is nothing new for an era when sexual identity is commonplace on TV, in movies, and in the magazines we read. I was just caught offguard, that's all, at my first encounter with a male senior citizen with breasts. But my manners were alert, and I maintained eye contact at all times, I swear!

Bizarre music busied the speakers as the stranger to my left delved into our discussion with engaging tales of his past days, like the time he bought a boat in B.C. that he unintentionally sailed into Mexican waters, where he was arrested by corrupt cops who demanded cash in exchange for his release. 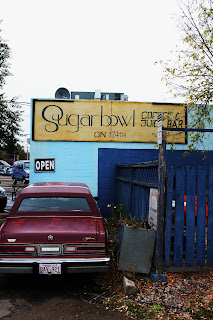 The silver-haired storyteller continued feeding me fascinating accounts of his adventures, all of which he told with genuineness, until finally stepping behind the bar to pour himself another mug of draft. As it turned out, this may have been Conrad himself, telling me he was a co-owner who also ran a website business in the back of the 15-year-old watering hole.

The actual bartender had been busy shutting off lights and cleaning up after customers that had already left. I was the last one in the cafè, chewing on the melting ice of my second Jack & Coke. I thanked the bartender for his friendly service and the other gentleman for the company, and left near 10:00PM, about an hour earlier than their official closing time. Apparently, lights-out depends on foot traffic.

I hit the road, still muddled by the reckless stories as told from the old guy with boobs. Not as classy as the street's Cafè de Ville, no, but I have to admit, I won't forget Conrad(s) anytime soon.