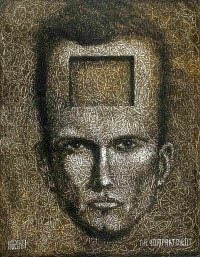 NIGHT of Artists XIII kicks off at 6PM on Thursday, November 5th, at the TransAlta Arts Barn (10330-84 ave.) in Old Strathcona, where more than 20 artists will be featured, displaying their work in live music, visual art, poetry, dance, fashion and more.

The annual arts festival was founded in 1997 by globally showcased St. Albert artist Phil Alain, who also transitioned the event into the national NOA magazine. It had begun as a solo show in St. Albert, but has since evolved into a national stage for the arts community.

"Think Outside the Box" is this year's theme, running from the 5th until Saturday, November 7th, featuring artists like Lewis Lavoie, Heather Brewster, Bear Lamont, Chris Riley, Bonnie Hood, and Alain himself.

Thursday's passes ($50) are sold out, but Friday ($25/ $30 @ door) and weekend passes ($50/ includes VIP Gala) are still available at TIX on the Square (780-420-1757), which is located downtown at Sir Winston Churchill Square.
e
Night of Artists Old Strathcona Phil Alain Think Outside the Box TIX on the Square TransAlta Arts Barns