- September 06, 2009
Hit after hit, Adams gave an adoring crowd exactly what they wanted...and then some! 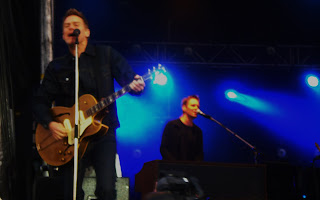 "Let's make a night to remember," insisted a 49-year-old Bryan Adams, and although these words were simply lyrics to one of the Canuck rocker's seemingly countless hits, they easily could've served as the tagline preluding one of the most entertaining concert nights Edmonton has put on all year.

Friday night's show had the potential of falling victim to Edmonton's unpredictable and inconsistant weather, as the hours preceding it had been wet and dreary, similar to last month's AC/DC downpour at Commonwealth. Fortunately, not a drop of rain spoiled Adams' outdoors bash at the city-owned Telus Field, where 7,500 fans, all with at least one thing in common, merged to forfeit their inhibitions to the pop-rock chords of one of Canada's most fortunate musical talents.

The night started off on a slightly soured note, as tedious traffic and problematic parking--or lack thereof--made my good friend Misty and I late enough to sidestep the opening act altogether (if there even was one, that is). Sometimes...scratch that...most times, this is a good thing. Crowded hallways welcomed our entrance--my first--into the baseball stadium, nicknamed the "phone booth" for what are now obvious reasons, where legions of fans stood in lines longer than my patience.

The only booth vacant of sweaty, tipsy concert goers was the one to purchase T-shirts ($30), but a quick glance at the inventory was enough for me to see why. Each of the half-dozen shirts looked like they were made by artsy art students who ran outta colour, all prone to grey backgrounds and not much else. The only other available momento was a copy of Adams' latest CD 11 ($12), last year's acoustic record that went to #1 in three countries, including Canada. 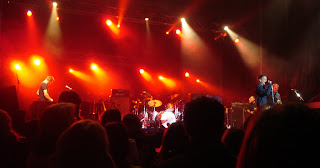 After Mist and I spent $15 each on a pair of drinks, we adorned our blue wrist bands for floor patrons only, and then shoved past the crowds into the open field that rests in the arch of the river valley. I chit-chatted with various work friends and acquaintances before we found our wet seats in row five of the floor, no more than ten feet away from the quaint stage. Things were looking up already.

By 8:00PM Adams came outta nowhere--okay, he came from backstage--and immediately launched into "Can't Stop This Thing We Started," with his four-piece band, which included lively lead guitarist Keith Scott, who apparently shops at the same clothing outlet as Adams. The dynamic duo, both clad in denim from head to toe, put on one vigorous performance after another, pulled back from time to time to spare us a ballad ("Heaven," "Have You Ever Really Loved a Woman?"). At times it even felt like Scott was eyeing the spotlight, but graciously bowed out, knowing no one was here to see him.

Unabashed folks in their forties, fifties and sixties made up the bulk of the assembly, attired in hoodies or light jackets to shelter from the barely breezy skies above, but they proved just as robust as any metal mosher, filling up the aisles to dance to the beats of "Summer of '69," and sway to the strums of "Please Forgive Me." Security gave up on protesting the aisle-hoppers by the third or fourth song in.

"Adams did not show his age once during the night, honing his parched chops and parading the stage from side to side..."

But let's face it, Bryan Adams has always put out adult-oriented music, songs that belonged to Top 40 radio, like "The Only Thing That Looks Good on Me Is You," "I'm Ready" and his most notable hit, "(Everything I Do) I Do It for You," all of which he played for us during the night. In fact, Adams played nothing but familiar songs, reminding the thousands of fans of just how many hits he's produced over the last quarter-century. 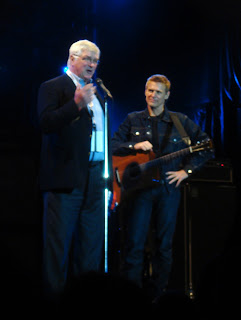 Somewhere in the middle of his set Adams, who seemed genuinely impressed with our praise, requested some vocal assistance from a volunteer in the audience. "The woman in white," Adams demanded, as security lifted a 40-something lady onto the stage, where she told us she's a St. Albert school teacher named Tracy. She didn't exactly knock it out of the ballpark, but Tracy definitely got an 'A' for effort, stumbling through the lyrics of "When You're Gone," a duet Adams had originally recorded with former Spice Girl Melanie C. This was surely a night Tracy wouldn't soon forget.

Adams did not show his age once during the night, honing his parched chops and parading the stage from side to side, right up until 9:30PM, which was about the time the band bowed, said their "thank you's" and "goodbyes," and then scurried backstage. The crowd remained as is, in a perpetual haze of adoration, waiting for what we all knew was coming. The encore.

Adams and co. re-rushed the stage, sending the mob into a roaring serenade, as the bass, guitars and drums synchronized for "Run to You," "Somebody" and one of my personal favourites, "Cloud Number Nine." And then it was over...or so we thought!

Yet again, Adams took to the stage, this time solo, and hit the mic. He thanked Edmonton for risking the rain and baring the traffic for the show, which also doubled as the kickoff party for the 2009 Edmonton Oilers Faceoff. In fact, Adams told us of his afternoon spent with new Oilers owner Daryl Katz, before he introduced new Oilers head coach Pat Quinn to the stage, where he was welcomed by a frenzy of gracious applause.

"The pyrotechnics are nothing," Quinn bellowed. "It's all about the music." He couldn't be more right, but Quinn was there to encourage us to expect good things from the upcoming hockey season rather than join Adams in another tampered collaboration. 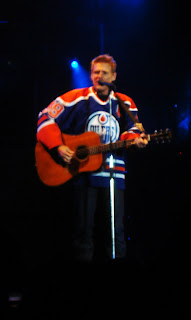 "We will be a team that compeats, I promise you that," he continued. "It is a great pleasure for me to represent Daryl Katz and his family. They wanted to kick this season off right, and I'm in the presence--and very humbly--of greatness....[Adams] is truly a national icon and a treasure....we wanted to kick it off right and there's no Canadian better to do that for us than Bryan. He's a hockey fan, but I'm not sure he's an Oiler fan yet, but he's gonna put this sweater on and I promise him that he can get in any Oiler game, even if I have to shove him in a duffel bag!"

With the crowd abuzz, Adams tried on a #99 Oilers jersey, then strapped on his acoustic guitar as Quinn left the stage. There was one last song under his Oilers sleeves. Thousands swayed to the rhythm of "Straight from the Heart" (see a video below), Adams' swan song for the untainted night, and then the rocker went backstage, for good this time. Fireworks showed us to the exits, lighting up the skies above Telus Field and the river valley, capping off another in a string of memorable concert events.

Mist and I, caught offguard by exceeded expectations, made our way back to my awaiting Neon. I tore off the $50 parking ticket from my windshield, smile still intact, unphased by the nuisance of petty bylaws. Surrendered restraint allowed a union of homegrown rock fans kick up their heels to "Kids Wanna Rock," bob their heads to "18 'Til I Die," and hum the "Na Na Na's" of "Cuts Like a Knife," and Adams seemed to eat it up. That was definitely worth the $50 parking ticket.

This is a video of Bryan Adams performing "Straight from the Heart" live, though it was clearly not recorded at the Edmonton concert.