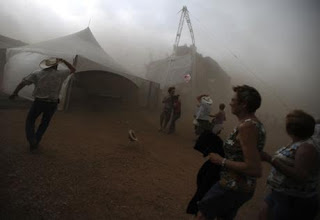 A few months back a friend of mine asked if I had ever journeyed the 56 miles to Camrose to take in the 4-day festivities of the Big Valley Jamboree*. I told her I never had, intimidated by the ticket prices and the long drive. But, last Thursday night (September 17) I didn't have to flip the bill or hit the road, because the Jamboree came to me! More appropriately, it came to Edmonton and the Rexall Place, as a "makeup" concert to not only finish what they started, but also to pay tribute to the late Donna Moore.

During the third day (August 1) of Camrose's summer staple, an abrupt storm struck the grounds of the BVJ, sending thousands of unadvised country music fans ducking for cover, and with good reason. The storm seemed to have come out of nowhere, according to testimonials, paralyzing the 18th annual event as it crumbled the stage in the midst of a performance by country singer Billy Currington. Some 75 attendees (including Currington's bassist) were injured at the show, though a collapsed speaker killed 35-year-old Moore, of Lloydminster. Organizers cancelled the Jamboree's final day.

Those same organizers (Panhandle Productions) scrambled to make good on promised performances that never made it to the stage on August 2, including headlining act Tim McGraw. It wasn't long after the tragedy in Camrose that Panhandle announced Rexall Place would graciously waive venue fees and host a makeup concert some six weeks from the intended closing date. The engagement, booked for September 17, was exclusive to those who held tickets for VIP or reserved seating, 3-day passes or single-day tickets for August 2. Oh yeah, and those with bosses who own suites, such as yours truly. 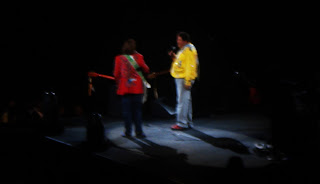 I must admit, I felt like an uninvited guest at a party, sitting in our catered luxury suites amongst those thousands of folks who fended off 120 km/hr. winds back at the Jamboree. This night belonged to them and I was intruding on what was supposed to be theirs that early August afternoon, but country music fans are acknowledged for their courtesy, and I'm sure would've welcomed me--and the rest of us gate-crashers--with open arms, hats off.

The show ignited a few minutes past 7:00PM, MC'd by Edmonton's own Danny Hooper (of CFCW)--who playfully bragged about meeting Tim McGraw's bus driver backstage--and CISN radio host Chris Scheetz. I hardcored it in Suite 114, slamming back cola and chicken sandwiches, as unknown after unknown took to the stage, which sat in the center of the room, so all 16,000 seats could be taken advantage of for the sell-out show.

The aptly-titled "Songwriter's Circle" warmed up the crowd, playing songs most people hadn't heard before, with the exception of the century-old standard "Will the Circle Be Unbroken," which brought the whole lot of them (Clayton Bellamy, Shane Chisolm, Samantha King, Tracy Millar and Duane Steele) together for the arena-wide singalong.

We breaked briefly to allow Australia-born, Alberta-bred Gord Bamford set up camp on the stage, which included four mini catwalks extending out at each corner, to permit all floor residents a close-up of the night's entertainment. Bamford, who welcomed daughter Memphis into the world August 3rd, played a lengthy set, which included national hits like "Heroes," "Little Guy," "Blame It on That Red Dress," "Postcard from Pasadena" and the current "Drinkin' Buddy." 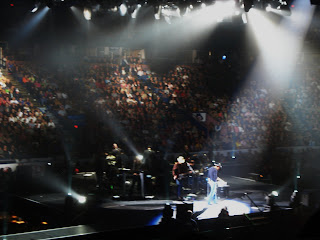 Bamford's energy barely registered, but it was apparent that he was doing what he could to put on a good show for the people, slipping into an Oilers jersey at one point, updating his fans of his newborn's health scare, and inviting a young girl onstage to share a dance with him. She tried, too, but the buzz of an arena crowd had the young lady almost as lethargic as Bamford's predominate plaid 'n' denim duds.

Next up were U.S.-based comedy/musical duo Williams & Ree (pictured above left), who also go by the modest moniker of "The Indian and the White Guy." Over three decades into their career as casino and club regulars, (Bruce) Williams & (Terry) Ree graced us with their hilarious off-colour humor that poked fun at racial issues that would kindle fist fights under any other circumstance. But they assured us we were here for a good time and that their jokes were just that.

"I got a tattoo of an Indian on my left arm, and now my left arm doesn't work," told the "white guy" to a mass of laugh-stricken cowboys and...if you include my sister and I...Indians. We took no offence to their brand of rough-around-the-edges banter, borrowing unsuspecting concert goers as the butts of their jokes, in addition to wisecracks that harassed the likes of douchebag Kanye West, Red Deer lesbians, and those chicks with butterfly tattoos just above their ass cracks. Unfortunately, their $20 DVDs were sold out before I even got to the T-shirt vendors.

"I felt like an uninvited guest at a party, sitting in our catered luxury suites amongst those thousands of folks who fended off 120 km/hr. winds back at the Jamboree."

But, for the bulk of us, we weren't here for Bamford, the Songwriter's Circle, or even the politically incorrect musings of Williams & Ree. We were here for the man of the hour, Mr. Tim McGraw, who snuck up onstage when the lights simmered. Cowboy hysteria broke out from hereon in, as the CMA-winning superstar introduced his setlist via "I Like It, I Love It," a song that hit No.1 for the singer 14 years earlier. McGraw refrained from taking up our time with mindless chatter, sticking mostly with a cascade of chart-topping hits, including "Just to See You Smile," "Something Like That," "Where the Green Grass Grows," "Red Ragtop" and "Last Dollar (Fly Away)." 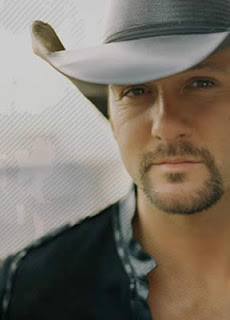 Cameramen surrendered to the pleas of the ladies in the crowd, offering up ass and crotch shots galore, but it was really all about the music that night. Thousands sang along--or tried to at least--to McGraw's 15-year-old catalogue of hits, standing at times, swaying at others. And instead of leaving the stage only to make his way back up to transition into the accustomed encore, McGraw side-stepped and remained as is, extending his set into a few more songs before he concluded with my personal favourite, "Live Like You Were Dying"...a message I'm sure Donna Moore herself would consent to.

So, as McGraw and his Dancehall Doctors left the stage, and as the lights shone over the arena, I took in the subtle moments that, for myself at least, overshadowed even the biggest of hits from these select musicians during the four-and-a-half-hour show. It was the crazy drunk girl dancing all alone in the aisle to my right, uninhibited until a cop lectured her into taking a seat. It was Bamford guiding us into a "moment of silence" for Ms. Moore, giving way to a brimming arena in a silent stance. And it was the genuine glee on the faces of fans who scurried up to the stage for a brief encounter with McGraw, who obliged at every request.

It's times like these, in addition to the congregation of good friends and good music, that make you think about how lucky each and every one of us are, dodging the threats of fatality at every and any corner. Donna Moore's death was not in vein, allowing thousands of fans who shared in her passion for country music to realize our own lives can be snatched away at any given moment. Perhaps then, she'll go down as a martyr for those of us who refused to live like we were dying...or at least like we could at any given moment. May she rest in peace.

*Hosts of the concert proudly announced that the Big Valley Jamboree would, indeed, return for the summer of 2010.

Below is another bad video I captured, this time of Tim McGraw pumping up the crowd at Rexall Place, just before he breaks into song. Sorry about the quality!