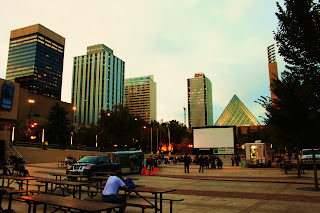 ONE week before Edmonton kicks off its 23rd annual International Film Festival on September 25th, it hosted a free double feature screening at Churchill Square last Friday (September 18). Initially intended to be a 2-day series that offered up one picture per evening, organizers were forced to cancel Thursday's outting due to weather, squeezing both films (Man on Wire and Bye Bye Blues) into Friday evening instead.

Drive-in movie theatres are a thing of the past, or at least they are here in Edmonton, so I was excited to take in Anne Wheeler's Bye Bye Blues (1989) on the giant inflatable screen (supplied by Fresh Air Cinema) in the heart of downtown. I had never even heard of this 20-year-old feature film by Edmonton-born director/ writer/ producer Wheeler, but it was more about sitting in a lawn chair in the Square on a Friday evening, sipping on hot chocolate & Kahlua as a minor breeze interrupted the calm, than the movie itself. It could've been Freddy Got Fingered or a Pauly Shore movie projecting onto the screen and I would've headed downtown to the concrete patch. Okay, maybe not, but you get where I'm going with this.

I met up with a buddy of mine, Colin, at the Second Cup nestled in a corner of the Stanley A. Milner Library, which rests a streets-length away from the Square. We each bought a coffee before making our way to the inflatable screen that was quarantined by police tape. There were only a few others already in their makeshift seats when Colin and I arrived, so we had the option of setting up our fold-away chairs at any given spot on the grounds. 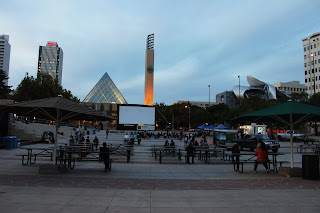 There were a pair of booths set up to the right side, by the City of Edmonton and the EIFF, as well as a couple of food vendors that served hot dogs, mini doughnuts and popcorn. The area slowly filled up with lawn chairs and Thermos', and there was no need to dim the lights...Mother Nature took care of that.

Shortly after 8:00PM a gentleman representing the EIFF greeted us to the Square, though was met by a few minutes of technical difficulties with the microphone, so resorted to plain old shouting until the problem was fixed. Then, Anne Wheeler herself said hello and introduced her Alberta-shot, locally-based film Bye Bye Blues, which she directed, wrote and co-produced (with Avi Liimatainen). The 2-hour feature was nominated for 13 Genie Awards in 1990, accepting statuettes for Best Actress (Rebecca Jenkins), Best Supporting Actress (Robyn Stevan) and Best Original Song (Bill Henderson's "When I Sing").

Admittedly, I was not floored settling into the first 10 minutes of Bye Bye Blues, which is set through the Second World War in rural Alberta. Jenkins is Daisy Cooper, a young mother who is forced to raise her two children alone as her doctor husband is overseas fighting in the middle of a brutal war. Daisy finds herself lost and lonely for companionship, all the while remaining loyal to her hubby, who may or may not be alive.

"...It was more about sitting in a lawn chair in the Square on a Friday evening, sipping on hot chocolate & Kahlua as a minor breeze interrupted the calm, than the movie itself."

In order to afford a pair of sneakers for her young son, Daisy earns her first-ever $3, dusting off her piano "skills" at the local watering hole one night. That parlays into a steady gig as the singer in a dance band who eventually find themselves popular enough to tour the province and appear on local radio. In the meantime, Daisy is reluctantly falling for the band's trombonist Max (Luke Reilly), who's ceaseless yearning for her swells as the years pass by. When the war ends, so does Daisy & Max's cat-and-mouse relationship, as her husband Teddy (Michael Ontkean) suddenly reunites with his wife and son, and acquaints himself with the daughter he never met. Max and the rest of the band hit the road and Daisy stays back to settle into family life. 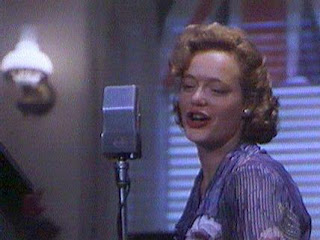 Even with specifics in toe, Daisy's was a common tale of the days when the world was at war, as young Canadian wives were left back to take care of growing children and the bills, while fathers & husbands came back changed men to re-arranged lives. Anne Wheeler revisits that way of life in this charming little movie, though it moved slowly and lasted longer than my bladder anticipated. Overall, I was pleasantly surprised, considering my bias towards Canuck cinema.

The winds chilled, the skies had darkened, and my hot chocolate went cold, which was our cue to pack up and go, passing on the follow-up documentary Man on Wire. Colin and I walked past the Milner library, the Winspear Theatre and Canada Place to my awaiting Neon, each satisfied with our intro to this year's EIFF, which has promised to be a season to remember. Be sure to support your local and independent cinema and check out at least one of the more than 200 short and feature-length films screening this year at the Empire Theatres in Edmonton City Centre. You can purchase tickets at TIX on the Square (780-420-1757/ 1-877-888-1757).
e
Anne Wheeler Bye Bye Blues Churchill Square Edmonton International Film Festival EIFF Man on Wire movie review Rebecca Jenkins Stanley A. Milner Library