-Last Tuesday (Sept. 15) night homegrown talent Mike Comrie, 29, rallied up a pair of assists during the Edmonton Oilers' first pre-season game, giving way to a 4-1 victory against home team Calgary Flames. "It's a long pre-season, and the guys are just trying to feel each other out," said linemate Comrie, who recently surprised his hometown when he resigned with the Oilers on September 10, six years after leaving the team on a sour note. The exhibition game was the first for the Oilers guided by new head coach Pat Quinn, who replaced Craig MacTavish after seven years with the Toronto Maple Leafs. 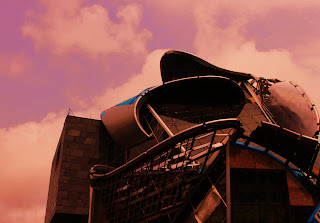 -Randall Stout, the L.A.-based architect behind the eccentric facelift of the 85-year-old Art Gallery of Alberta (pictured above), will be speaking this Saturday (Sept. 19) at next door's Winspear Theatre, about the grand opening of the esteemed project. In addition to speaking of the gallery's open house, Stout will present photos of the top secret interior and divulge the inspiration that led to Edmonton's boldest architectual structure since...well, ever! Tickets for the lecture, which starts at 2PM, are available at the door (or 780-422-6223) for just $10. You can read The Edmonton Journal's interview with Stout by clicking here.
e
Art Gallery of Alberta CISN Corb Lund Edmonton Oilers Mike Comrie Pat Quinn Randall Stout Winspear Theatre