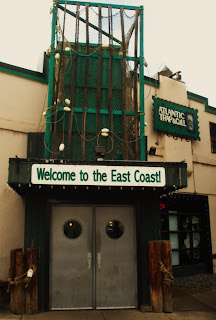 I've never been to the East Coast, thus I've never experienced first-hand that authentic Maritimes lifestyle that has set the region apart from the rest of Canada, kinda like how Stephen is amongst the Baldwin brothers (just kidding, calm down). But there's an underlining charm buried within those Newfie accents, and a carefree, pull-no-punches agenda that leaves me envious to no end. So, for now, the closest I can get to St. John's infamous George Street are via grub 'n' pints joints like The Atlantic Trap & Gill.

Dreary Sunday late afternoons usually aren't set aside for high balls at Whyte Ave. for myself these days, but Monday was a holiday, poker was around the corner, and my sister Carrie and I were in the mood for a brisk pick-me-up. In fact, it was Carrie who suggested one of her former drinking holes, the Trap & Gill, which is anchored just five blocks off the Whyte strip. I obliged.

The structure greets you with a sign that reads "Welcome to the East Coast!," resting above the front doors that looked like they once led into the kitchen of some large vessel. But if there's one thing I've learned over the years, it's to never judge a book by its cover. Remember that kids.

A small stage is the first thing you see when you walk in, but it's not long after that that you'll notice the busy interior, as the walls and ceiling are covered in everything and anything Atlantic, from fisherman nets to life preservers. In between the cluster were licence plates, tin beer signs, photos of partying patrons, and other seaside oddities that made up the corky decour.

"I noticed...a sign in the shape of a boat that pointed the way to the 'shitters'."

We sat at one of the pub tables in the back corner, giving me a bird's eye view, of sorts, as I took in the rest of the room. I noticed a pair of arcade games, chalk boards hidden under coloured scribbles of lunch specials, a single pool table, and a sign in the shape of a boat that pointed the way to the "shitters." Classy.

But in its defence, whatever possible allure these trimmings may offer, they surely come out in prime time. I'm referring to Thursday, Friday and Saturday nights, when that small stage at the front of the bar is occupied by rock, Celtic, or Celtic rock acts like Duff Robison, Jimmy Whiffen, Jason Greeley and the Derina Harvey Band, all of whom make up September's calendar page. Ultimate prime time, though, would be St. Patrick's Day, a night the pub is already counting down to! 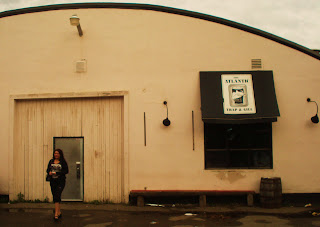 In addition to the live entertainment, the 9-year-old Trap & Gill also offers daily food specials that stretch from Monday's "P.E.I. mussels" to Sunday's "all you can eat fish & chips." The menu also tempted us with suggestions like "The Big Arse Cheeseburger" ($10), "The k.d. lang Special" ($8) and "Can't Make Up Your Friggen Mind Platter" ($17).

But rather than sample these auspiciously-named choices or the native dishes of the East Coast, my sister and I dined over chicken fingers ($10) and tasteless poutine ($8), respectively. And instead of sipping on Blue Star or Screech, my sister downed a Coors Light, while I tried the house rum. We paid our tab, left our sticky tabletop and headed out the back door into the parking lot.

As I walked to the car the only word I could muster up in my head was "ehh," the universal term for "nothing special." But I think it's only fair that I give the Trap & Gill another chance, sticky tables and all, in the heart of the St. Patties celebration next March. See you then!