- September 27, 2009
e
Let's face it, before Wayne Gretzky and the rest of the Oilers' dynasty era players, not a lot of outsiders even heard of Edmonton. These Oilers put our humble town on the map since joining the National Hockey League back in 1979, after eight years playing as a WHA team. They went on to win five Stanley Cup championships (1984-85, 1987-88, 1990) within a span of less than a decade, making household names out of Gretzky, Mark Messier, Jari Kurri, Kevin Lowe, Glenn Anderson, Paul Coffey, Andy Moog, and Grant Fuhr.

This photo is of the giant 850lbs. Stanley Cup replica that stands 12.5 feet on the corner of one of the United Cycle buildings in Old Strathcona (10323-78 ave.). Christened "The Spirit of Stanley," the area landmark was erected--after about 650 hours of labour--as a gift to the citizens of the "City of Champions" from United Cycle, IMARK Fabricators, the Oilers and the city itself. The cup was completed near the end of 2007, to coincide with United Cycle's 80th anniversary as Edmonton's largest independent sporting goods store (as well as Hockey Alberta's 100th anniversary). 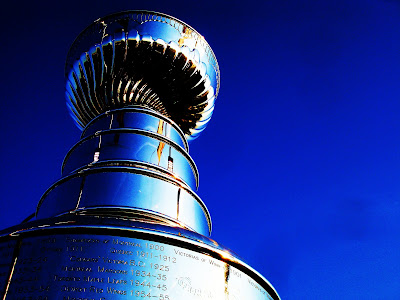