It's been one hell of a year discovering what our city has up her sleeves, so let's reminisce, shall we? 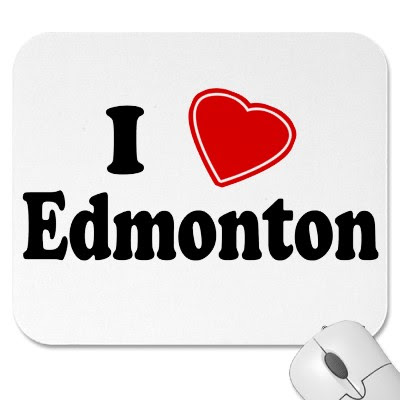 WHEN I first started I Heart Edmonton 365 days ago, I had to admit that I was not a very good Edmontonian. I know...crazy, right?! But it's true. I never attended any of our 2 million (& counting) festivals, I certainly couldn't recommend any local venues or restaurants based on personal experiences, and I'd be hard-pressed to name any of our local bands, aside from Corb Lund or the Edmonton Symphony Orchestra. Does that even count?

I Heart has given me a 360 shift, in terms of my knowledge, awareness, and even appreciation for our city and what she has to offer. I had no idea how outta the loop I really was.

Skip ahead one year later and I've gotten to know my hometown on a much more personal level, taking in homegrown bands, comics and theatre performers, shoving past crowds in clubs, galleries and cafes I'd never been to before, falling for the charm of established and rising festivals, and interviewing some of the most talented and interesting Edmontonians out there.

It's been an experience, no doubt.

But that's not why I started I Heart Edmonton back on July 5, 2009. It wasn't for the free tickets and CDs, or getting put on guest lists. It wasn't because it'd give me reason to get out and actually do shit. Nor was it an excuse to show off some of my photos, which you can do by clicking here. I have no shame.

The main reason I started blogging about Edmonton and how hot 'n' sexy she is, is because I had had enough of all the douches and dickheads wining about how much they hated our city and that there was nothing to do here (hence the term "deadmonton"), complaining about issues that every North American metro deals with. Pot holes, litter bugs, bad drivers, homelessness, and cold weather is not special to Edmonton, believe it or not.

I mean sure, we've got problems that other big cities have seemingly cured (i.e. better transit, Mike Sobel), but we're working on the ones we haven't yet...for the most part.

So, lets stop focusing on all that negative crap, or at least offer up some solutions. I took it upon myself to, instead, celebrate and promote the best (and I use that term loosely at times) of our city, and what makes this a great place to visit, do business, or live.

It's been my pleasure, too. I've gotten to know some pretty awesome folks and had a gay old time along the way. Gay still means happy, right? Anyways, I thought I'd share with you lovely readers of I Heart some of my favourite moments of the last 52 weeks, as part of this "blog." I hope you enjoyed the ride thus far, and stay with us during year #2! And if you don't, I hope you all the best in hell (just kidding, geez!). 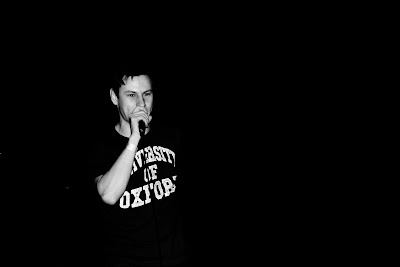 Favourite Awkward Bathroom Encounter/ May 7, 2010
Yes, it's a strange place to meet someone (unless you're George Michael), but that's where I befriended local rapper and Old Ugly Recording's The Joe (Mr. Gurba, if you're nasty) (pictured right). It was pre-show at the "Funky vs. Fresh" concert at the Avenue Theatre, and I had just purchased Gurba's CD Ut Oh days prior, so thought I'd introduce myself somewhere between the sink and urinal. As it turns out, Joe's a pretty cool guy and a helluva hip-hop artist to boot, as I learned later that evening. We grabbed a quick bite to eat with fellow rapper Jonek, got to know a little about each other, and will hopefully meet again someday...just not in another bathroom, I hope. A record shop, maybe, or a BBQ?

Favourite Hidden Gem/ July 31, 2009
How little there is to see and do there may by why I found Passa Tempo so damn enticing. To say the wine bar is small would be an understatement, but charm runs unbridled at this place, kinda like the wine and hard liquors available for patrons of Passa Tempo, situated seven blocks north of Whyte Ave. Clients-slash-acquaintances conversed at the bar--the only available seating--as manager Gwen poured drinks and chatted over subdued Mos Def and Modest Mouse, the front door wide open to the summer night. Candlelight, chalkboards, and cheese platters made up the rest of the covert canteen, which I hope never comes out of hiding. And remember, size DOESN'T matter!

Favourite Reviewed Movie/ January 1, 2010
Avatar, hands down! For all you who haven't seen it yet, but hate it anyways, go fuck yourselves! (You know who you are!).

Favourite Musical Moment/ August 26, 2009
This was the most difficult category to narrow down to just one single moment. It easily coulda been the time when Michael Bernard Fitzgerald had the whole floor stomping and clapping to his concert finale "Brand New Spaces" at the Starlite Room. Or when all of Rexall Place sang along to the familiar lyrics of "Sex on Fire" with the Kings of Leon. Maybe even Ray Mailman's Oasis-ish rendition of an original parody called "Puppy Love," during a Christian talent showcase at the 9910 Centre. 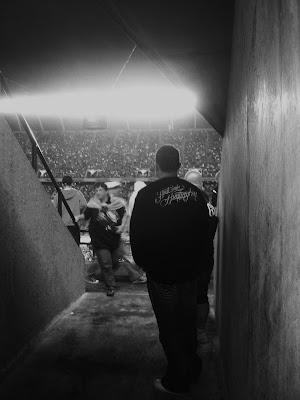 But the one show I keep coming back to is AC/DC's stadium concert back in August (pictured left). I don't think I'll soon forget standing in one of the far back concrete rows of the Commonwealth that evening, pumping my fist into the pouring rain with 60,000 other mesmerized rock fans alike, as Brian Johnson shouted out "Oi! Oi! Oi!" The lightning lit up the sky, the thunder shook some nerves, the rain soaked our T-shirts and posters, but the music made us stay put.

Favourite Exhibit/ May 9, 2010
Prior to May I'd have gone with last August's Wildlife Photographer of the Year Exhibit at the Royal Alberta Museum, where I remembered why I'm almost never without my camera. But, thanks to a Mother's Day excursion to the Art Gallery of Alberta I was exposed to something completely out of the ordinary.

It just happened to be the final day of Janet Cardiff & George Bures Miller's "The Murder of Crows" (January 31-May 9), so I count myself lucky to have experienced the coalescence of its voice, music and sound. 98 speakers hung from the ceiling, or stood against walls, on chairs, and sat on the floor of a spacious, darkened room of the AGA. They, and the fold-up wooden seats, faced a common table near the center of the room, holding up a gramophone that bled the haunting, yet sedative noise of a so-called "crow funeral." Nearly had me in tears, but I couldn't tell you why.

Favourite Pleasant Surprise/ January 23, 2010
I'm just as ignorant to religion as Lindsay Lohan is to class, so imagine my hesitation when a buddy invited me to a Christian talent show for young adults in the dead of winter. But, I was pleasantly surprised with not only the wide range of talents these church folks had obtained, but also with how little the subject of God came up. Zero! Not that that's a bad thing, to discuss religion, but I hadn't agreed to the invite to be solicited by God-fearing youth, and as it turned out, I had nothing to worry about.

Favourite 'Music Clip of the Month'/ May 6, 2010
Every month I sift through YouTube videos of musical clips posted by local musicians and bands, to share a "Music Clip of the Month" with those who spare their time on this little site o'mine. So far, I'd have to say May's selection, Eamon McGrath's "Welcome to the Heart" (which could also serve as this blog's slogan!), could possibly be my fav. You're more than welcome to check out the clip for yourself at the bottom of this post.

WELL, there you have it. Some of my favourite moments from the last year (well, the ones that I can tell you about at least!). But there are so many others that I won't soon forget, like the John Mayer-Michael Franti concert at Rexall, Mack Male & Don Iveson, et al, at "Pecha Kucha Night #7," spending an evening with my buddies at the DEDfest Horror Festival, being plugged on live TV by the lovely Michele McDougall (Citytv's Breakfast Television), mentioned by Jennifer Fong in an Edmonton Journal article, watching the Olympic flame carried past me by Doreen Ryan (pictured below), viewing Anne Wheeler's Bye Bye Blues in Churchill Square as part of the EIFF kickoff, joining Edmonton's active Twitter community, ...well, I can go on and on, so lets just stop there, eh? 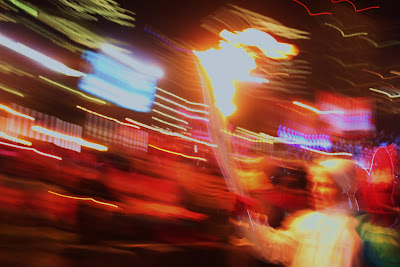 While I have you here I'd also like to thank YOU, my billions of readers from around the Galaxy, including those of you who stuck by even when I Heart was on a break. And thank you to all my good (and not-so-good) friends who kept me company at the various restaurants, cafes, clubs, movies, festivals, concerts, galas, exhibits, and whatever I else I dragged them to over the last year (thanks, Carrie, Colin, Andrew, Karen, Misty, Goran, Amanda, Melissa, Richard, Austin, and all the rest).

Oh, and of course, thanks to all those ridiculously talented Edmontonians who are making the city worth bragging about. If not for them I'd be spending my evenings and weekends watching reruns of The Office and killing innocent bystanders in Grand Theft Auto. Actually, that doesn't sound so bad!

Thank y'all for everything, and I hope all of you keep reading why I Heart Edmonton! Cheers. 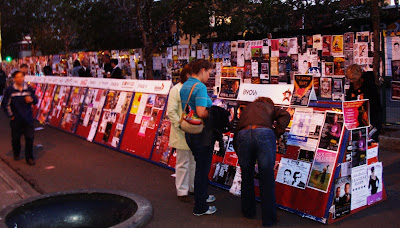