Photo Op: On the High Level

- July 08, 2009
e
Since June 1913 the High Level Bridge has been connecting South Edmonton (Old Strathcona) with the downtown, spanning the North Saskatchewan River. It was erected the year after the former city of Strathcona amalgamated with Edmonton, in 1912, bridging the gap of the two municipalities.

Designed by Phillips B. Motley (of the Canadian Pacific Railway), the High Level added the "Great Divide Waterfall" (by artist Peter Lewis) in 1980. 10'6" (3.2m) above the pavement is a railway and streetcar track that still operates briefly in May (Victoria Day weekend) and October (Thanksgiving Day weekend). 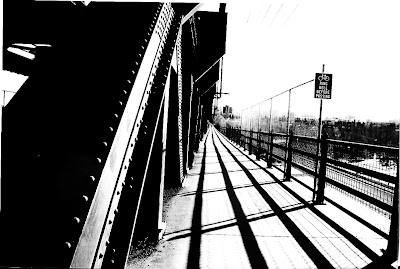