- July 21, 2009
e
Built over a six-year period (1907-13), the Alberta Legislature Building was designed in the Ècole des Beaux Arts style by architects Allan Merrick Jeffers and Richard Blakey, who incorporated Greek, Roman and even Egyptian elements into the $4 million project. It resembles similar government buildings in the capitals of Manitoba and Saskatchewan, which was a style that had originally been linked to Paris' School of Fine Arts.

Located at 10801-97 ave. (NW), the Leg serves as the seat of the 83-member Legislative Assembly of Alberta and the Lieutenant-Governor of Alberta (Norman Kwong). Free tours are offered at the Edmonton staple throughout the week (780-427-7362), though most prefer to just hang out at the free "pool" and fountain outside the front doors. 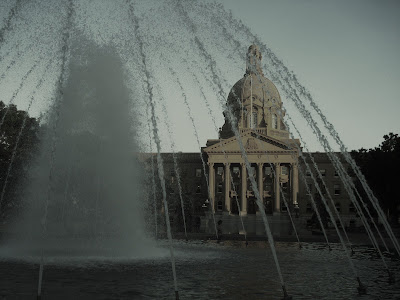