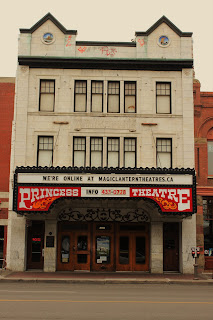 I know what you're thinking, that what could the Princess Theatre possibly bring to the table that's any different from all those multi-plex movie theatres sprawled throughout the city? The truth is, the Famous Players and Cineplex showrooms offer much more than the twin-screen Princess ever could, but that isn't always a good thing. Sure, the multi-plex's host like a dozen screens, can offer the IMAX experience (Scotiabank Theatre @ West Edmonton Mall), and are equipped with fancy seating areas, mini-arcades and, in one particular case, a fire-breathing dragon (again, Scotiabank), but daunting crowds, raised ticket prices (about $13-$18), and a lack of smaller, indie and foreign films are just some of the things you'll have to put up with when you walk through the doors of these giant chain theatres. But, to each his own, right?!

Much like the Garneau Theatre (8712-109 St.), the Princess is a small, limited screen movie palace that has called Edmonton home for many years. In fact, it's the city's oldest movie theatre still standing, opening its doors for the first time on March 8, 1915 as "the largest stage in western Canada." But its fare was a lot different in those early days, as it hosted high-class vaudeville and musical concerts. The first commercial film that was ever shown at the Princess was The Eagle's Mate (1914), which starred Canadian icon Mary Pickford.

The original 638-seat palace was established by John Wellington McKernan, who hired the local Wilson & Herald architectural firm to design the "small but lavish" movie house, which included white B.C. marble on its 3-story face. Even after McKernan had succumb to the Spanish flu epidemic in 1918, his family continued operating the Princess up until 1957, after which it had become the first Edmonton theatre to show a talking motion picture. It was also the city's only theatre on the southside right up until 1939.

It wasn't long after new owners took over in '57 that the Princess experienced a downfall, soon closing its doors to allow its space to be used to sell retail. By 1970 Towne Cinema Ltd. bought the structure and renovated it, reopening it as Klondike Cinema, soon switching from second run films to adult movies. The Old Strathcona Foundation leased the theatre in 1978, then purchased it in 1982, eventually restoring it to its former glory, becoming a leading art house for years. A second screen (Princess II) was added in the basement of the 94-year-old building, in 1999.

Last Wednesday a buddy and I decided to check out one of the alternative films that make the theatre special to the Edmonton region, as they famously show films that no other theatre in town will, excluding its cousin the Garneau, which is located just off of Whyte Ave. The movie was a sci-fi thriller called Moon (read my review here), which was the directorial debut for David Bowie's son Duncan Jones. It starred Sam Rockwell and featured the voice of Kevin Spacey, star of my all-time favourite film, American Beauty (1999). 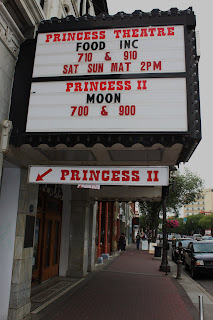 Unfortunately, you cannot purchase your tickets much in advance--about a half-hour at the earliest--and online purchasing is out of the question. Immediately after you walk through the old-school wooden-glass doors you're welcomed by the ticket booth to your left. The tickets, which are those tiny square stubs you can buy in giant rolls at any dollar store, are only $10, and no GST!

After the young lady took my ten bucks for Moon, she hurried over to the food vendor to take our order there as well. "You look familiar," I told her, before I ordered a pair of large Cokes ($3.50), skipping out on the popcorn this time. There isn't a huge selection of snacks available at the Princess, but who comes to the movies for the food anyways?

Behind us, directly across from the snack area, was shelving units that offered local publications (SEE, Vue, etc.) free for the taking, as well as reviews of the now-playing movies clipped from local newspapers and tacked onto a bulletin board, in addition to a box of free movie posters! After the patrons made their way down from the last showing, we climbed the stairs to the balcony area, which "fills" up much quicker than the lower seating section. We took our seats amongst the 617 that are available at the neo-classical venue, as my buddy pulled out a pack of licorice that he snuck in! As usual, the movie started a tad bit later than the scheduled showtime, but there were no complaints.

One of the best things about the Princess (not to be confused with the now-closed theatre on Jasper Ave.) is that once the movie ends you can make your way downstairs and head out to the bustling Whyte Ave., which boasts a nightlife unlike anywhere else in the capital region. In fact, we had downed a rum & Coke next door at Blues on Whyte just before we bought our tickets. This is the allure of the historical theatre, that and its old-fashioned feel, where true movie fans can go and take in the films that don't need the over-zealous exposure to impress audiences.