D.B. Buxton, For One Night Only

- June 27, 2010
He may reside in Vancouver, but D.B. Buxton's heart belongs to Edmonton, and he'll return for a performance at The Hydeaway next weekend 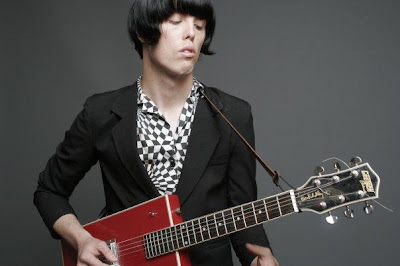 SURE, he's got a peculiar haircut and a rectangular guitar, but judging books by their covers is a foolish game, as I've come to learn.

D.B. (Daniel Benjamin) Buxton has transferred 15 years of busking on Edmonton's streets into a more refined, yet soulful sound, dented with funky beats and insightful lyrics.

If you don't believe me, listen to "Discokings" (featuring Corvid Lorax), "Fame and Money," or the 7 and a half-minute "rough mix" of "The End of the Party," all available at the click of your mouse at Buxton's MySpace page.

The genre-bending musician and songwriter was only 15 when he left home to sing for passersby in the Old Strathcona region. His back-up band would eventually consist of a tambourine, a harmonica, and a piece of plywood to stomp his foot against. Much more economical!

It wasn't long before Buxton became one of Edmonton's most popular and recognizable street performers, even topping the ballots of SEE magazine's "best busker" polls several years running.

As he gained attention over the years, Buxton would moonlight as a producer, arranger, bassist, pianist, or even dancer, collaborating with local hip-hop acts Eshod Ibn Wyza and later Cadence Weapon.

By December '06 Buxton took to the radio, hosting his own unique program, Dream Machine, on Edmonton's CJSR FM 88.5, exposing locals to montages of his spoken word arrangements and snippets of his almost undefinable songs. It aired for one hour every Sunday evening.

He formed the stripped down D.B. Buxton Revue during 2007, staging self-promoted shows at that season's Works Festival, and at the Savoy Lounge on Whyte. In the upcoming year he entered Clayton Marsden's home studio to record his debut EP No Refund, which he took on tour soon after.

Unfortunately for us, fortunately for the West Coast, Buxton relocated to Vancouver last year, where he continued busking, playing smaller venues, and connecting with that town's own vibrant indie music scene. There, Buxton formed rock side project The Orpheans, made up of former members of The Green Hours Band.

But Buxton will be on his own when he comes home to tantalize a hopefully sold-out crowd at The Hydeaway (just above the Jekyll & Hyde Pub) in downtown Edmonton on July 3 (cover TBA). Be there!