- June 17, 2010
Sci-fi devotees are being summoned to take in an afternoon of movies & raise funds at the same time 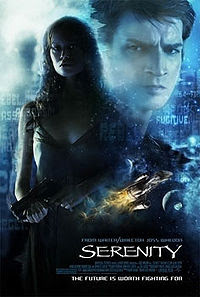 THE Alberta Browncoats Society, a non-profit group based out of Edmonton, is inviting everyone and anyone with $15 to spare to come check out their double-bill movie night the Sunday after next (June 27).

The Stanley A. Milner Library Theatre--yes, they have a theatre, too!--will screen Serenity (2005) and Browncoats: Redemption (2010), the former of which stars Edmonton-born actor Nathan Fillion. The latter is a Firefly/Serenity fan film that'll see all profits earmarked for charity.

'Can't Stop the Serenity' was hatched up by Christopher Frankonis in 2005, and has since realized more than 40 charity screenings across the world. Most of these charity-benefiting screenings were held on or around June 23rd, so as to pay homage to the birthday of Joss Whedon, creator of the sci-fi TV series Firefly (also starring Fillion).

These screening affairs went to benefit Equality Now, which also happens to be one of Whedon's favourite charities, and were all organized entirely by crews of volunteer fans!

For more information about this event click here. Below is the official trailer for Browncoats: Redemption (courtesy of YouTube).