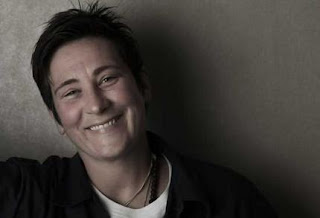 NOT many people realize that although k.d. lang grew up in the farming village of Consort, about two hours southeast of Edmonton, the legendary singer-songwriter was born in our city, on November 2, 1961.

But her stay in the capital region was short-lived, as her parents, Adam and Audrey Lang, uprooted the family to Consort, Alberta when k.d. (Kathryn Dawn) was just nine months old.

By her teens lang was studying at Red Deer College, where she performed in a play that ignited her fascination for music, and for Patsy Cline in particular. In 1982 she answered an ad in an Edmonton newspaper, looking to form a western swing band, the reclines, a tip of the hat to the late Cline.

That led to touring across the country and a record titled Friday Dance Promenade (1983). Lang eventually left the reclines behind, but not before a couple more albums and national awards.

Lang gained attention south of the border only after she began singing back-up for Roy Orbison, who died just a year after the pair collaborated on an updated duet version of Orbison's "Crying." The song was released on the soundtrack for the 1987 film Hiding Out, and won a Grammy Award for Best Country Vocal Collaboration. It reached #42 on the Billboard country charts. You can watch the video below. 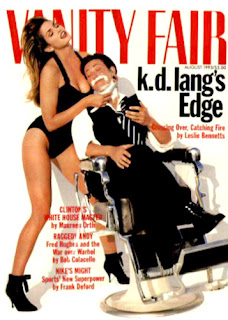 During 1988 lang finally launched her solo debut, the Owen Bradley-produced Shadowland, which earned her her first gold record in the U.S. She reunited with the reclines for the Grammy-winning, gold-selling Absolute Torch & Twang, in 1989.

Lang's music career peaked with 1992's Ingènue, which sold more than 2 million copies in America, and won another Grammy for her only Top 40 pop entry "Constant Craving." That same year lang, who has been out of the closet since her teens, made it official in an article for gay & lesbian magazine The Advocate. She quickly became the most recognizable openly gay woman in the world.

Nicknamed an icon of "lesbian chic" in 1993 by New York magazine, lang turned heads with a Vanity Fair cover & spread that same year, in which she posed "provocatively" with supermodel Cindy Crawford (pictured right). She's since been actively campaigning for gay rights causes, including HIV/AIDS care & research.

From there lang continued putting out acclaimed sets, including 1995's All You Can Eat, 1997's Drag, 2002's Grammy-winning A Wonderful World (with Tony Bennett), 2004's Hymns of the 49th Parallel, and '08's Watershed, the latter two offering her stirring cover of Leonard Cohen's "Hallelujah."

Earlier this year lang performed the song at the opening ceremony of the Vancouver Winter Olympics, which struck a chord with Canucks coast to coast, who took the live rendition to #2 on the Canadian pop charts.