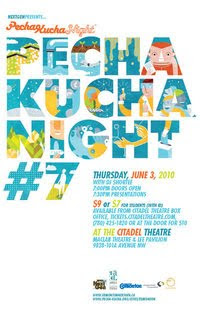 THE sound of chit-chat. That's what the Japanese term pecha kucha (pronounced 'peh-cha koo-cha') translates into; a unique style of socializing that has caught on around the world, and right here in Edmonton. In fact, more than 300 global cities have adopted the conversation!

Pecha Kucha was pioneered in 2003 by Astrid Klein and Mark Dytham, of Tokyo's Klein-Dytham Architecture. They devised a way to gather locals at their new experimental event space, the Super Deluxe, and invited a wide range of guest speakers to fill the time.

But these time slots were precise, as each participant would have just 6 minutes and 40 seconds to offer their presentation, as a slide show paralleled their speech behind them, each of the 20 slides running just 20 seconds.

This allowed young professionals to share and exchange their ideas, consult with their peers, and build relationships and contacts they may never have had otherwise. And the topics are diverse, to say the least, from arts & culture to sports & recreation to education & business opportunities.

In order to divert young, bright, and innovative professionals from skipping town to breed their skills in larger North American or international cities, Edmonton City Council decided to put together a task force in 2005 that would essentially convince our homegrown talent to stay put.

That's when the Edmonton Next Gen Committee was born, made up of volunteers all under the age of 40. They included City Council members, City of Edmonton employees, and community volunteers, with a mandate that would target a demographic of 18-40. However, as the first seven presentations have proven, there are plenty of over-40 folks interested in the concept.

"We have the desire to make Edmonton a better place to work, live and play in the future," reads the committee's official website. "Our mandate is to understand, solicit input and develop focused and practical recommendations for action about how Edmonton can be more attractive to the next generation and how it can keep them here."

Cary Williams, chair of the Next Gen committee, adds: "It's a challenge because we're a unique vehicle. No other city has done something like [Next Gen] before," he continues to Merge magazine. "And at the end of the day, we are all united by wanting the same thing: a better city that we can all be proud of."

Amongst Next Gen's most favoured events is Pecha Kucha Night. On May 1, 2008 Edmonton hosted its first pecha kucha session at the Winspear Centre, becoming only the third Canadian metro to adopt the notion. That premiere night included submissions by urban planner Simon O'Byrne, photographer Ted Kerr, architect Shafraaz Kaba, and others. 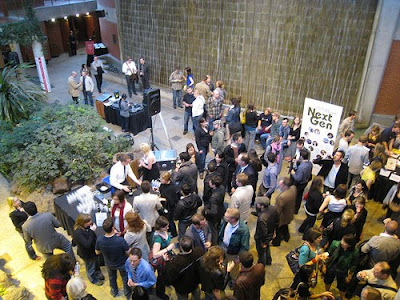 But I was most familiar with the cast of Night #7 (Thursday, June 3, 2010), the latest in this series, which is hosted by a new proprietor each time. This time around it was the Maclab Theatre at the Citadel (9829-101A Ave.).

It was a very last minute decision to finally take in one of these special events. I didn't even know what 'pecha kucha' meant until I was sitting in the audience of the Maclab, and overheard some guy explaining it to somebody else behind me.

I headed downtown soon after getting home from work last Thursday. I paid $10 (+ service charges) for a ticket inside Pecha Kucha Night #7, and waited in the foyer near the water wall on level one of the Citadel. DJ $hortee was set up amongst the crowd, chit-chatting over wine and beer. All $1,300 raised from these drinks went to benefit E4C, a charitable human services organization since 1970.

I sat near the stage, skimming through a copy of Merge magazine as I waited for the show to start. Cover boy Ken Bautista was amongst those I recognized in the theatre. Others included Williams (who helped select door prize winners later in the night), iNews880's Brittney Le Blanc, The Edmontonian's Jeff Samsonow, The Unknown Studio's Adam Rozenhart, and one of the night's speakers Mack Male (pictured bottom left).

Most of the attendees seemed to be around my age (15x2), but others were clearly younger or much older. As seats filled up, I saw illuminating screens scattered throughout the crowd, Twittering, emailing or playing zombies vs. vampires video games on their iPhones, iPads, notebooks, and blackberries.

By 7:40PM hosts Ryan Stark and (city planner) Brian Murray had taken to the mics to introduce themselves and Pecha Kucha Night #7. They mentioned that there were now 308 cities around the world participating in the Pecha Kucha concept, including a half-dozen tonight. They briefed us on Next Gen and what we were to expect out of the evening, before calling up local entrepreneur Gregg Oldring.

With just under 7 minutes to his name, Oldring lent us his insight into the importance of designing a business. The man who "sends emails for a living" kicked off the night and set the bar high with his preachy wrap-up. His comfort on stage was clear, as was his passion for design. But I was still unclear on this whole theory. 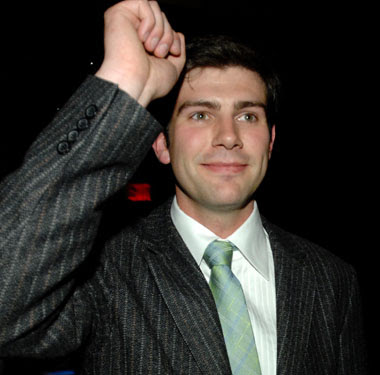 The night continued with mini presentations of phobias (by dEdmonton's Darryl Plunkie), technical accessibility's (by biomedical engineer Daniel Tse), local Aboriginal awareness & pride (by rural sociologist Zoe Todd), and how images can say so much (by photographer Alistair Henning).

Ryan & Brian commenced an intermission at about 8:40PM, though it seemed to stretch on far longer than necessary.

Ward 5 City Councillor and one-time I Heart Edmonton Q&A participant Don Iveson (pictured right) launched into the second half of the night with a compelling and excitable discussion about...Lego! You read that right! Mr. Iveson showed us pictures of urban structures made outta Lego blocks that he fervently pieced together with his son.

Iveson must've been born to do this; speak publicly and garner a crowd's attention like only few can. His humour was subtle, yet engaging, and his dedication to his presentation--albeit Lego--was the highlight of all the talks.

Nerves had gotten to speaker No.7, Tamara Stecyk, a Montreal-born, Edmonton-based journalist and blogger who spoke about Edmonton's homeless community. Although Stecyk struggled to maintain her shaky voice, her showcase was perhaps the most important of the night, focusing on the recent photo and literary contest "Expressions of Hunger." Good on her though, for coming out of her comfort zone to spread awareness of a worthy cause.

The speech I was looking most forward to was up next. Prolific blogger and software developer Mack Male--who also took part in a I Heart Q&A last February--is well-known to locals for his desire to promote our city and make it a better place to live.

"What kind of city do we want to be?" asked Male, who runs what's got to be the city's most popular blog, Mastermaq. Without any notes or cue cards, Male pulled numbers and stats out of the air, and recalled facts and figures with ease, guiding us through his own engrossing vision for our city.

Jason Openo, Program Chair for Leadership Edmonton, was the last presenter during Night #7, his premise eluding me though. I know it had something to do with leadership and enlarged chickens! Sorry, Jason!

But that's probably because the chit-chat get-together wrapped up with what Ryan & Brian referred to as "PKN Off the Cuff." It was a new idea for Edmonton's version of this global discussion series, as a pair of improv junkies that simply went by Tad & Arlen were to end the evening with some off-the-cuff farce. 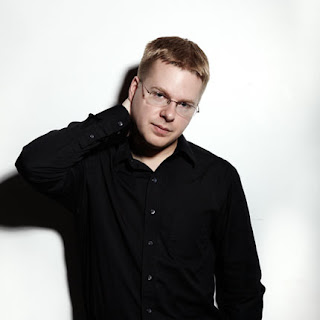 Arlen was not available though, so in his place was former Fringe artist Jessie McPhee. McPhee and Tad (Hargrave) tossed a red balloon into the crowd to determine who'd they'd solicit for an improv subject for a slide show made up of random photos that neither of them had seen before.

"What was the last thing you purchased, sir," asked Tad. The man answered, "a hair shaver." They went from there, hilariously incorporating a hair shaver into each image that popped up on screen every 20 seconds. It was a great way to end the night, though nudity would've worked, too!

The hundreds of guests left the theatre and reconvened near the waterfall, where drinks continued and DJ $hortee spun beats until...well, I actually don't know. I was too tired to stick around for the after party, which started shortly after 9:30PM.

But I came for the presenters anyways, and for the opportunity to put names to faces, and to connect with locals of the same faith, of sorts. To better the city we've all come to love. It's exciting to become a part of this initiative, a movement, one that's destined to dare dreamers, intrigue and inspire innovators, and persuade young, talented and in-demand locals that they don't have to leave Edmonton to obtain their goals, anymore.

Cary Williams said it right: "We need a catalyst for bringing people together to talk about creative ideas. We need people to come together and recognize that creativity is integral in the framework of a city."

Pecha Kucha Night, which was sponsored by the City of Edmonton and Capital Power, will continue with Night #8 on Thursday, September 23, at the University of Alberta's new interdisciplinary Sciences Centre. For more information about past and upcoming events you can follow Next Gen on Twitter or apply to receive their newsletters.

Here's a list of Night #7's presenters, in order of appearance:

Below is a video montage of Pecha Kucha Night #7 (by Raffaella at Vimeo).

Below is a video clip explaining the concept behind Pecha Kucha Edmonton.