- November 23, 2010
Tony Scott borrows from a so-so true story for a worthier film set--mostly--on a set of train tracks
BY EMIL TIEDEMANN 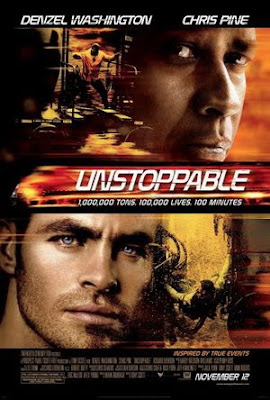 I ADMIT, I formed my opinion of Tony Scott's Unstoppable before the trailer even ended, writing it off as another not-bad-but-forgettable Scott effort. His fifth with Denzel Washington. Calm down, Scott fans, opinions are like assholes....
Anyways, I know when I'm wrong and I'm not afraid to confess such. Unstoppable, which had a budget of about $100 million (!), wasn't a flawless spectacle by any stretch of the imagination, but it exceeded any expectations I had of a Scott film. Of a Washington film, for that matter.
Two-time Oscar winner Washington plays train engineer and single father of two Hooters waitresses Frank Barnes in Unstoppable, itself inspired by true events. In 2001 Ohio was put on alert when an unmanned train, full of toxic materials, barreling down the tracks at 47 mph, until it was finally brought to a stop by trainmaster Jon Hosfeld.
Scott (& screenwriter Mark Bomback) upped the ante by clocking this fictional runaway train's speed at 70+ mph, as it menaces Pennsylvania when a hostler (Ethan Suplee) hops off the train he's manning--just for a sec--and a series of unfortunate incidents prepare certain calamity over the next hour.
Barnes, in the eve of forced early retirement, is paired with rookie conductor Will Colson (Chris Pine), the two of who are in charge of connecting their locomotive with its parent train. Scott-Bombark toss in a sub-story that has Colson in the middle of domestic frustration, attempting to restore his marriage after a restraining order is implemented by his wife (Jessy Schram). It has no real reason here, but to--perhaps--imply some dimension to Pine's character.
It may also allow a connection between Frank and Will, despite their many differences, in that both--Frank being a widower on the verge of retirement--are at a crossroads in their lives. But each of their problems are resolved as a direct result of their heroic initiation to stop an "unstoppable" machine destined for a populous town. 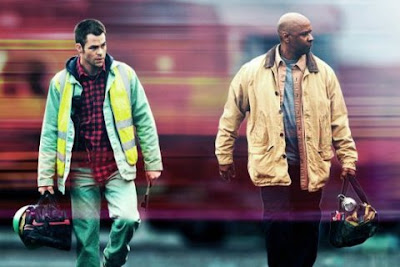 Rosario Dawson is a finely-cast addition here, lending her skills as Connie Hooper, the train yardmaster who guides and monitors the situation from the company control room.
Regardless of what one might think going into a movie based on a runaway train, Scott positions just enough energy and action in Unstoppable, without being ridiculous about it. Washington and Pine are fine together, sparing the story with some genuine chemistry and scattered comic aid.
It's a quality piece that's lightly based on a lacklustre truth, but--like all Hollywood blockbusters--amplifies the story with whatever a $100 million budget will allow. But no matter the expendable cash limits, a story like this can only go so far. Scott does what he can with it.
I mean, imagine if this movie had gotten into the wrong hands. Say a Michael Bay and Vin Diesel pair-up! Maybe I should just appreciate that.
3 stars outta 5
Below is the official trailer for Tony Scott's 'Unstoppable.'
At the Movies Chris Pine Denzel Washington Ethan Suplee Jessy Schram Jon Hosfeld Mark Bomback movie review Rosario Dawson Tony Scott Unstoppable