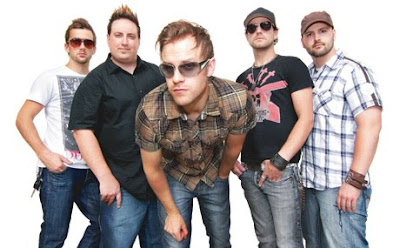 OKAY, technically, Tupelo Honey hails from that town next door, St. Albert, but we're gonna go ahead and take credit for them. That goes for Mark Messier and Jarome Iginla, too.
The band, christened after a popular Van Morrison song, was formed while the members were enrolled in Grant MacEwan's music program. They had each performed in other bands prior to starting Tupelo Honey, in February 2003.
From there the band--made up of vocalist Matt Landry, drummer Greg Williamson, bassist Steve Vincent, and guitarists Dan Davidson and Tyler Dianocky--issued a self-titled EP (2006) and played their first live show, at Stage 13 in Camrose.
They've since opened for the likes of Bon Jovi, Three Days Grace, Billy Talent, Sam Roberts, Default, and Theory of a Deadman, and released a couple more EPs on Fontana Records. Their last effort, '08's Machines & Robots, featured national hits in "Morphine" and "Not Alone." The video for the latter was shot right here in Edmonton.
"Not Alone" was written for victims of domestic or family violence and who are suffering psychologically. "The song's not too specific," Davidson told Vue Weekly. "It's pretty broad and, I think that's sort of what we were going for. The more situations that people can take meaning from it, the better for us."
Below is the video clip for Tupelo Honey's "Not Alone" (2008).
Grant MacEwan Machines and Robots Music Clip of the Month Not Alone St. Albert Tupelo Honey Vue Weekly