- November 14, 2010
It's been nearly a month since his 3rd-place finish during the election, but mayoral candidate Daryl Bonar has no plans on giving up on his political future.
BY EMIL TIEDEMANN

"I ACTUALLY, genuinely thought I could win," Daryl Bonar said after coming in third during the recent election that had the 32-year-old real estate investor running for Edmonton's Mayor. "I was under no illusions. I knew I was a long shot, but I was in it to win it."
Insistent on not fading into the murkiness that rarely eludes electorals after their exhaustive campaigns, Bonar has not exactly thrown in the towel when it comes to his political hopes. But rather than running for the Mayor's job next time, Bonar is considering a seat in City Council three years from now.
Bonar, a former mixed martial arts fighter and Canadian Forces communications officer, has also been encouraged to run for both provincial and federal parties. And why not? Entering a race as a "young & inexperienced" underdog, Bonar still gained over 20,000 votes on October 18, enough for a respectable third. It's also more than double the combined votes for 4th, 5th, 6th and 7th place mayoral candidates.
Had Bonar come out victorious--and in a way, he did--many of his views, both short term and long term, for our city contradicted incumbent Stephen Mandel's, and we'd have seen a major shift in direction. Bonar was not able to conjure up enough support to officially present his ideas to council. Ideas that would effect all current local debates, from LRT expansion and crime rates to the City Centre Airport closure and the proposed downtown arena complex.
I Heart really dropped the ball with our interview with the Vancouver native and father of two, who agreed to answer some of our questions before the October election. For that I apologize, but because Bonar remains a potential candidate for future elections, and had a sizable impact on the municipal vote, we're gonna share his responses with you, nearly a month after Mandel was re-elected as Edmonton's Mayor.
I'd like to thank Mr. Bonar for his time, and hope him all the best in his plans for the future, whether they be political or not. Now, lets spend a few minutes with Daryl Bonar.
Part I:
-You spent two tours in Bosnia as part of the Canadian Forces. Tell us about your experience there. "Bosnia was my first foray outside North America. I quickly realized that the news can only show or tell a very small portion of a story. My first tour may have been the single most eye-opening experience of my life. I witnessed the after effects of a viscous war. The stigmas and scars left on the country and its people were very evident. I began to appreciate Canada and our blessings here in a whole new light.
I grew up in social housing, living in extreme poverty, but my upbringing was a holiday compared to the life that many Bosnians were now facing. Every soldier takes something different away from their experiences. The first six-month tour overseas may have been a period in my life where I experienced the most personal growth. Among the many lessons I learned and carry forward is that I take nothing for granted...and I mean nothing...not my warm shower, not my warm bed, not even my toilet. As well, I have seen what great displays of compassion and teamwork can do to overcome adversity of any type. In short, like many soldiers, I can't say enough about my experiences in the Forces."
-What's the most beneficial thing you learned from your time in mixed martial arts? "A lot has been made about my mixed martial arts experience in this campaign and perhaps not for the right reasons. As a competitive martial artist I experienced a great deal of personal growth through constantly testing myself physically and mentally. Training was grueling but very rewarding. The competitions were emotionally demanding.
Being on national television several times in front of thousands of hollering people was something else. The competitions were some of the greatest tests of strength, speed, endurance and mental fortitude that I have ever been involved in. There are no excuses for defeat as it is not a team sport and as such there is a lot on the line emotionally. The comraderie amongst the athletes was special. These individuals by and large are some of the most humble and gracious people you will ever meet."
-When and why did you end up in Edmonton? "I was posted to the 3rd Batallion Princess Patricia's Canadian Light Infantry in August 1999 here in Edmonton. I made Edmonton my permanent home, buying property, getting married and raising my family here."
-What is one thing about Edmonton that you think stands out from other Canadian cities? "Many things stand out when talking about Edmonton, but [there is] one I believe stands out above all other. In Edmonton we have this special blue collar entrepreneurial spirit that is second to none. In this city hard work and innovation genuinely pays off. It is common here in Edmonton to have a small business grow to a mid-size business and then grow to a large business. Edmonton has allowed many people to prosper and fulfill their dreams, mine included." 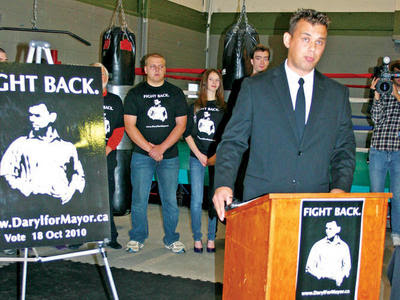