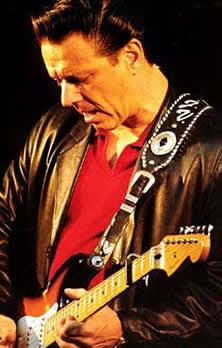 TICKETS are still available for the 12th annual Labatt Blues Festival, which will hit up The Heritage Amphitheatre (Hawrelak Park) from Friday, August 20 to Sunday, August 22. Western Canada's premier blues event will include performances this year by Jimmie Vaughan (pictured left), Monkey Junk, Candyce Kane (Friday), Tom Rigney & Flambeau, The Twisters, Henry Gray & the Cats (Saturday), James Harman, Bob Brozman, Boogie Woogie Blowout (Sunday), and many others. There are no longer any weekend passes ($75-$90) or Saturday tickets ($45) left, but Friday and Sunday tix ($40, $45) are available at Ticketmaster. Shuttle transportation is available at the University of Alberta Stadium Parkade each day.

MOST of you are simply gonna ignore this blurb, but for those who care, the Intact Insurance Canadian Derby Edmonton Marathon is this weekend (August 21-22). Starting (and finishing) at the Northlands Park racetrack, the 21.1K run/walk kicks off at 8AM on Sunday (Aug. 22), though the 5K and 10K runs will be held on Saturday (Aug. 21) at 6:30PM. Saturday will also include the Running Room Friendship Run (10:30AM) and the Kids Marathon Mile (4:30PM). First place in the marathon will fetch you $1,000, but all competitors must first register and pay the applicable fees. For more information you can call 1-866-441-7591.

INDIE musicians from (mostly) around Western Canada will converge at the Hawrelak Park Amphitheatre to perform as part of the 1st annual Open Sky Music Festival (Saturday, August 28/ 11AM-11PM). Proudly presented by Seven Strings Music Entertainment, the all-day outdoors concert will feature the music of Mobadass, Current Swell, Goodbye Beatdown, Makeshift Innocence, Kalai, and Edmonton's own Souljah Fyah, The Soulicitors, Cops and Robbers, Dani Jean, and Jeff Morris. Tickets for the all-ages show are now on sale (Ticketmaster/ 780-451-8000) and are set at $29.50 (+ tax). For more information you can check out the event's Facebook page.

ON the same day as the Open Sky Music Festival (Saturday, August 28), the river valley will also host the Rock the River Tour West concert, at Telus Field. The 7-hour (2:30-9:30PM) Christian rock show will include performances by Flyleaf, Skillet, Hawk Nelson, Downhere, Starfield, and Tedashii, as well as an appearance by Franklin Graham. No chairs, blankets or booze allowed for the all-ages show. Tickets are just $10 and will be available at the gate. The same show hits Calgary this Saturday (August 21) at their Canada Olympic Park.

LIKE Justin Bieber, the Edmonton International Airport (EIA) is going through a lot of changes lately, and now there'll be one more. The currently under construction airport announced last Friday (August 13) an agreement with Edmonton-based Platinum Investments Ltd. to erect a Courtyard by Marriott Hotel on site. "The Courtyard by Marriott will provide business, northern and connecting travellers with high-quality accommodations to compliment the new array of shopping, dining and entertainment choices they will experience when Expansion 2012 opens," said Peter McCart, EIA President, Marketing & Business Development. Construction on the 189-room, 8-storey, 190,000-square-foot venture will begin next spring, and is expected to open in time for the completion of Expansion 2012. See the video below.

IF you're all Fringe'd out by this weekend, then there's always the contending Edmonton Dragon Boat Festival, running from Friday, August 20th until Sunday the 22nd. The 14th annual festival will host "challenge races" this Friday, followed by the "placement races" on Saturday, and then the "Special Breast Cancer Survivor Pink Ribbon Race & Remembrance" ceremony during Sunday. The river valley festivities, hosted by the Louise McKinney Riverfront Park, will also include vendors, exhibitors, and live stage entertainment. The race itself is approximately 400m long and lasts no longer than 4 minutes! 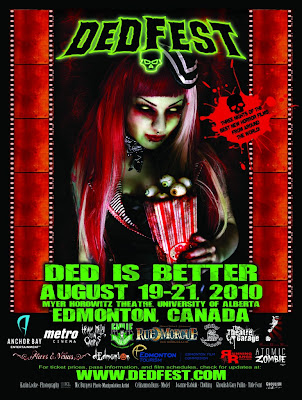 MORE than two months shy of Halloween, Edmonton will experience DEDfest this weekend at the Myer Horowitz Theatre (University of Alberta) from Thursday, August 19 to Saturday, August 21. Weekend passes go for $50 and will get you into any and all of the feature and/or short films screening at the 2nd annual horror movie festival, including [REC]2, I Spit on Your Grave, Black Death, The Human Centipede, Mutant Girls Squad, and the classic Re-Animator. Evening passes are $20 and are available at The Lobby (10815-82 Ave.) and Mars & Venus (10328-82 Ave.). "Canada's only pure horror film festival" was organized last year to "showcase the best in independent horror features and short films from around the world," according to their mission statement. "If it's gory as hell and scary as fuck, we'll show it."

LOCAL triathlete Paula Findlay, 21, has done it again! Last month the "rookie" took 1st place at the 2010 World Championship Triathlon Series in London, England, her third win this year. Findlay made it four when she was the first to pass the finish line at the Dextro Energy Triathlon ITU World Championship Series in Kitzbuehel, Austria, on Sunday (August 15). "It's funny," Findlay explained. "I did not feel as well-prepared for this race as I did in London. With the time change and everything, I felt really bas all week, actually. So, I was a bit surprised by the result." The University of Alberta student finished her race in two hours, three minutes, three seconds, ahead of Sweden's Lisa Norden (2nd) and New Zealand's Andrea Hewitt (3rd). Her next race, and this season's WCS final, will take place in Budapest, Hungary, on September 12.

SITING a "growing market, an increasing population, and a forward-looking leadership" as prime reasons, the Real Estate Investment Network (REIN) recently named Edmonton one of the best places in Canada to invest in real estate. The national organization of investors compiled a Top 10 list earlier this month, and chose our "perennial overachieving market" as the third most logical city to put your money into, behind Kitchener-Waterloo-Cambridge, Ontario (#2) and Calgary (#1). Some of the specific keys factors in Edmonton's high ranking were the LRT expansion and the ring road construction. Rounding out the Top 10 were Surrey, B.C. (#4), Maple Ridge & Pitt Meadows, B.C. (#5), Hamilton (#6), St. Albert (#7), Barrie & Orillia, Ontario (#8), Red Deer (#9), and Winnipeg (#10).

SAVE the date! On Friday, August 27 (7PM) local indie folk rockers the Cedar Tavern Singers will perform on the terrace of the Art Gallery of Alberta, in downtown Edmonton. The concert is free for all AGA members, and just $10 for all non-members, which will also allow you admission into the gallery's showcase of TIMELAND: 2010 Alberta Biennial of Contemporary Art.

FOR the last couple of weeks the Edmonton Corn Maze (at about 23rd Ave./ Garden Valley Road and between 215th St. and Highway 60) has welcomed locals to take in its 5km of twists & turns and 85 decision points, which the perfect patron could complete in less than half an hour. General admission into the corn maze is $9 ($7 for ages 5-12, free under 5), and hours are: Monday-Saturday (10AM-9PM), Sunday (1-5PM) (from July 30-September 7); and then hours change during September 8-October 16: Tuesday-Friday (4-9PM), Saturday (10AM-9PM), Sunday (1-5PM), closed Mondays. The Corn Maze is a proud partner of the Edmonton Food Bank.