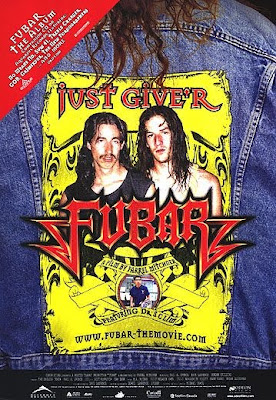 IN 2002 Michael Dowse directed and co-scripted what is now recognized as a Canadian cult classic, FUBAR, itself an acronym for 'Fucked Up Beyond All Recognition." The $400,000 mockumentary starred David Lawrence (Terry) and Paul Spence (Dean), as lifelong friends and the subjects of a documentary film that details the lives of the "common man."
Based partially on a Lawrence-Spence comedy routine, FUBAR premiered at the Sundance Film Festival, but really struck a chord with Western Canadians. In particular, Albertans. FUBAR, with the mullet ratio of a Poison video, was shot and based in Calgary, although that's no reason to avoid it.
But that was eight years ago and Terry & Dean have since matured. Well, not really. FUBAR 2, the long-awaited sequel, was shot predominantly in Fort McMurray and partially in the fine, ridiculously sexy town of Edmonton!
Dowse returns to the helm, and Lawrence & Spence to their respective leads, but this time they're driving their '86 Cutlass Supreme to work on the pipelines of Fort Mac, Pilsner in tow. Part of their journey takes them back down south to the City of Champions, where they spend some time taking in the Mall (you know which one I'm talking about, so don't even...).
Although FUBAR 2 premiered last week at the Toronto International Film Festival, it will make its Western Canadian debut at the 24th annual Edmonton International Film Festival (EIFF) on Friday, September 24 (9:30PM). It and about 150 other films from around the world will screen at this year's EIFF, hosted by downtown's Empire City Centre theatre.
Below is the official trailer for the 90-minute film, which you can buy tickets to here. For a complete list of the feature and short films of EIFF 2010, click here. The EIFF runs September 24 to October 2.
David Lawrence Edmonton International Film Festival Empire City Centre FUBAR FUBAR 2 Michael Dowse Paul Spence TIFF West Edmonton Mall