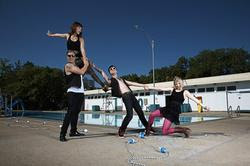 LAST May SEE magazine published their anticipated "Best of Edmonton" issue, which polls locals to determine everything from our favourite area festivals and local personalities to the best place to get a donair (FYI, Mike's Famous was crowned the latter).
Another popular category in the 15th annual readers poll is "Favourite Local Music Act." The top pick this year were indie darlings Shout Out Out Out Out, followed by national alt-rockers Ten Second Epic. And in third was the current "Music Clip of the Month" spectacle, Christian Hansen & the Autistics.
I only just heard about the band a few weeks ago, when I interviewed young local actor Mat Simpson, who claimed the last record he bought was Hansen's The Super Awkward Album (2006). A few YouTube videos later, and I was their newest fan.
Sonic's former "Band of the Month"--collectively Hansen (lead vocals), Molly Flood (keyboards), Scott Shpeley (bass), and Ava Jane Markus (keyboards)--have made the rounds of local venues and music festivals, promoting last year's full length premiere Power Leopard.
Rarely drifting further than the mischievous subjects of 3some's ("You Me Him Us") and jerking off ("Pump It"), Power Leopard, in all its '80s-bent glory, was applauded by the majority. Though some of the tracks, including "Cocaine Trade," resonate the fragments of new wave, there's a subtle darkness to their tone, barely noticeable to the human ear. Well, unless you actually listen to their lyrics.
Below is the video clip for "Cocaine Trade," which was directed by the lovely Bridget Ryan, and "shot & chopped" by CityTV cameraman and local artist Jason Carter. It was filmed right here in E-town, on September 29, 2009.