Want to know why Edmonton's most beloved radio personality scours Craigslist, owes the Hives an apology, and fantasizes about tackling our nation's narcissism epidemic? Then keep reading. 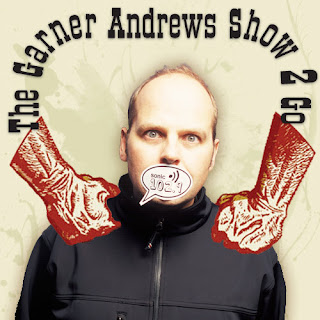 "I LOVE my life right now," boasts Garner Andrews, the man behind that voice you hear on your all-too-familiar morning commute, saluting substandard service and asking you to refrain from using debit cards in Tim Horton's drive-thru's. That is, of course, if your dial is tuned to 102.9 FM (and it's The Garner Andrews Show). And why wouldn't it be?!

And why wouldn't Garner love his life? The self-proclaimed "white, chubby, balding male Oprah" married his high school sweetheart, is the proud father of two little girls, and is one of our city's most sought-after media personalities. And apparently, he can play a mean banjo to boot?!

Actually, Garner's local adoration became clear-cut when, in 2006, he was voted "#1 radio personality in Edmonton" by SEE magazine readers. But this was no passing phase, as the weekly periodical declared Garner's reign for '07, '08, '09, and for a fifth consecutive year, in 2010.

It comes as no real surprise either, if you're a Sonic listener; Garner's topical and immersing discussions and rants, his ingenious on-air concepts (okay, maybe Tradio isn't that shrewd!)--and uttered with that made-for-radio voice--keep his billions of listeners returning to 102.9 FM every weekday morning (from 6-10 in the AM).

That's why I Heart wanted to get to know this...wait for it...Saskatchewan-born (I KNOW!), Chuck Klosterman-reading, Devo-listening, reality-watching, Sleeman Original Drought-sippin' wannabe treasure hunter with a trophy wife. And so I asked him a question or two...or 20:

You were born and raised in Saskatchewan, so when and how did you end up in Edmonton? "I left Saskatchewan in the spring of 1991 to take a radio job in Victoria, B.C. at 100.3 The Q. I stayed for five years, but my wife and I really missed our prairie roots (we're both from the SK). In 1996 we quit our perfectly good jobs and moved to Calgary so I could live the dream and start my own radio production/ freelance company. Fortunately for us and our bank account, The Q later ownership (OK Radio) believed in me enough and signed up as my first client. Almost nine years later, when OK Radio won the license to start a modern rock station here in Edmonton, I put up my hands and said, 'Can I do the morning show?' Again, the big guys at OK Radio (Stu Morton and Roger Charest) saw fit to grant me yet another radio wish and hired me for the job I have today. I really, really owe OK Radio a fruit basket."

If you weren't in the radio business, what do you think you'd be doing instead? "I have always enjoyed writing and creating stuff. I would love to write a book or a TV show or paint pictures or sing songs that I've written, but I have two little girls that would probably starve. In all honesty, I love auctions and wheeling & dealing and looking for hidden treasures in Kijiji, Craigslist and garage sales. I don't know if there is a career in that, but I think the closest thing might be auctioneer. I love stories about people that unwittingly buy Picasso's or Pollock's at flea markets only to discover they're worth tens of millions. (Now that I've said these words out loud--and it sounds ridiculous--I guess the answer to your question is: treasure hunter)."

How much say do you have in what you play during 'The Garner Andrews Show'? "I don't really stick my nose into that area at all. If a certain song or artist is getting an unusual amount of positive or negative reaction on the phone, I'll let Sonic music director Adam Thompson know, but for the most part I prefer to just let him do his job. There's a running joke around the building that if I like a song too much or if I heap too much praise on a song, it's the kiss-of-death for that song. Sorry, last Hives album, perhaps I loved you just a bit too much."

Can you tell us about your strangest or scariest caller while working at Sonic? "During my time at Sonic I have never had a face-to-face confrontation with a listener; there have been a few on the phone, but nothing in my face. There was an instance where a young guy started a fire inside his van outside the studio window. That kind of rattled me. He wasn't injured and, to this day, I'm not quite sure what that was all about, but it was upsetting. There was one other instance where a guy in a BMW came roaring up in front of the building, parked the car on the sidewalk and came storming in demanding to see me. Again, I'm not sure what it was all about--and I don't think he did either--but it does tend to throw you off a bit. In both cases it was obvious that there were some mental issues that needed to be dealt with and I sincerely hope they both got the help they needed."

You're somewhat known as an advocate for positive change in our city. What three issues would you like to tackle most if you were mayor of Edmonton? "I feel foolish when it comes to talking about the changes I'd like to see. They don't seem lofty enough, but I don't feel qualified to talk about issues like homelessness, the oilsands or the environment. They are extremely complex issues and it drives me nuts when I hear beauty pageant contestants, or people like me, oversimplifying them. The changes I'd like to see tend to be more personal changes. I'd love to curb the epidemic of narcissism that seems to be plaguing our nation. It's not an Edmonton-centric problem--it's everywhere--people walking around with giant 'I'm #1' foam fingers on both hands, living in their me first bubbles. How hard would it be to throw up your hand and thank the guy behind you for letting you merge, or make eye-contact with the person that just bagged your groceries? I'm not saying that we all need to be best friends, but a 'Hello!' and a 'Thank you!' have become rare commodities for some reason. I'm probably coming off sounding like I want to live in some fairy tale Mayberry utopia, but holy crap, somewhere along the way we were all lead to believe that we are special, that we're number one. The truth is this: you are special to your parents and that's it. The guy in the polyester uniform that you just yelled at because someone in the kitchen put mustard on your burger doesn't care what your parents think. To him you're just another douchebag with an overactive superiority gland."

What do you think about Edmonton's own music community, and our support of it? "I've been fortunate enough to live in several different cities in Western Canada and I have never lived anywhere with a more vibrant music community than Edmonton. I love the fact that whenever you go to a party or a bar, someone you talk to is in a band, starting a band, or learning to play an instrument. I've never met so many adults that have decided to take up an instrument as I have here in Edmonton and that says something about our musical environment. People are products of their environment and if they're starting bands, sweating it out in a club for very little pay or learning an instrument, than the local musical community has done it's job: inspire them and give them a launch pad."

If you had the chance to organize your own music festival, what would you call it and what bands would you want to play it? "The guys that I started Sonic with--Al Ford, Jason Manning, Adam Thompson--and I used to sit around in our old trailer and talk about how awesome it would be to have a modern rock festival in Edmonton. With the help of Union Events, that dream came true back in 2009 with the Sonic Boom Festival. We did it again in 2010 with Rise Against, Bad Religion, Weezer, City & Colour, Mother Mother and Wintersleep, and right now the 2011 edition of Sonic Boom is being mapped out. Personally (and I'm not making any promises--you asked me who I'd like to see), I would love to see Beastie Boys or Beck show up. And Social Distortion and Cake."

If there was a famous person you could trade lives with for one week, who would it be and why? "If I could trade lives with someone for one week it would probably be writer Chuck Klosterman, circa 2005, when he wrote 'Killing Yourself to Live.' As an assignment he was told to rent a car, drive around the U.S. and visit the locations where some of rock's greatest tragedies went down. I loved that book. Perhaps I'm just getting nostalgic for a time when I had all the freedom in the world just to hit the road; but packing a notebook and a week's worth of road snacks into the passenger seat of a rental car and just hitting the road is very, very appealing."

What kinds of things do you do in your spare time? "I have two little girls so I spend a lot of my time doing dad things. When it comes to 'me' time, I love to play the guitar, watch movies with my wife, listen to music, go for beers and wings with my friends, or just read. I've also recently started painting [pictured left and above]. I should have started painting years ago. Not that I'm good at it, but I thought about it for 10 or 15 years before I dove in and now I can't get enough. It's actually a dream of mine to display my paintings somewhere and have someone actually buy one. I sold one to some friends of mine in December. Actually, I gave one to some friends of mine because they babysat for us one night so my wife and I could go to my Christmas party. That's the closest I've come to selling one. Hey, do you wanna buy a painting?"

Where (in life) do you want to be ten years from now? "Ten years from now I still want to be talking on the radio and in podcasts. I really have no desire to do anything else as far as media goes. I love my life right now. One thing I can hopefully tell you ten years from now is that I actually finished one of the dozens of books and screenplays and teleplays that I've started over the years. I was born with a motor--I like to get things started--I love to create stuff. Unfortunately, I wasn't born with the 'finish what you started' gene. That needs to change."

ARTWORK PUBLISHED WITH PERMISSION FROM ARTIST.