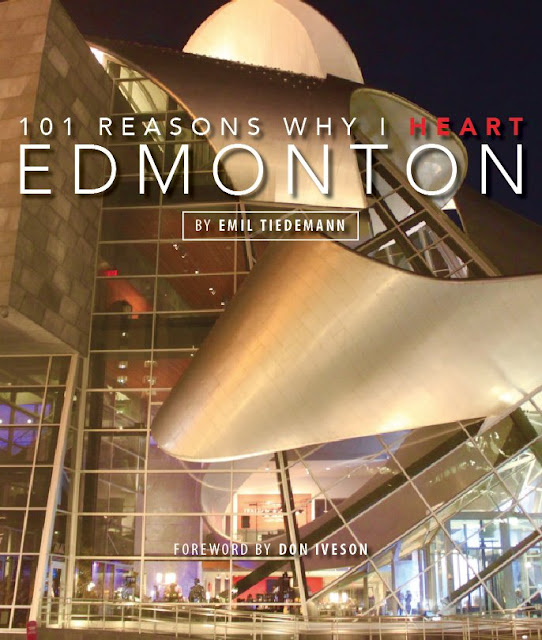 - I Heart Edmonton recently printed our "prototype" for an upcoming book project called 101 Reasons Why I Heart Edmonton! There is no date set for an actual release just yet, but please stay tuned for any updates!

-On Wednesday, April 20, Edmonton city council approved zoning changes that would allow the 16-storey Mezzo tower to be built just south of Whyte Avenue in Old Strathcona. Although there are plenty of people against the development, it is good news for the area if you ask me!

- Toronto-based BuzzFeed staffer Kat Angus had us going when she posted an article titled '23 Reasons Why Edmonton Is The Worst City In Canada'! Before you go batshit crazy on her ass, take a look at the post and you'll soon realize that she was just playing with our heads.

- On Thursday, the City released its list of the top priorities when it comes to the $9.5 billion in LRT projects, and the Valley Line is at the top. The line would extend the LRT from downtown to the west end, all the way to the Lewis Farms community, as well as West Edmonton Mall.

- Congrats to the awesome folks over at What It Is podcast, who recently celebrated their 100th episode! The highly localized podcast began back in 2012 and is currently one of the most popular podcasts in Edmonton.

-  Construction of the brand new Varscona Theatre in Old Strathcona is nearing completion! It is expected to open on Thursday, June 2 with a performance of For the Love of Cynthia by Teatro La Quindicina.

- The 36th annual Edmonton Pride Festival (June 3-12) is currently looking for performers to play at their Kick Off to Pride party at the Radisson South on Friday, June 3. They are also looking for nominations for their 2016 Pride Awards!

-  Ward 11 City Councillor Mike Nickel will be at Blue Chair Cafe (9624 - 76 Avenue) on Saturday, April 23 (9.30AM) for a "Coffee and a Chat," in case you have some questions or concerns about what's happening in your neighbourhood.

- Local band Brother Octopus is getting ready to launch their fourth studio album, Connected Through Corals on Friday, May 13. The CD release party will take place on Saturday, May 28 at The Almanac (10351 Whyte Avenue) and will feature A Gentleman's Pact and Ego The Jackal.

- It looks like Edmonton's first-ever night market (May 20 - Sept. 5) has hit a major hurdle, as the idea's proponent's application to host the event near the Canadian Pacific Railway Tracks at Gateway Boulevard was denied by the City. He is currently looking for alternative locations.

- 20-year-old Edmonton-born singer-songwriter Ruth B (b. Ruth Berhe) is going places! Her debut single "Lost Boy" has climbed to #41 on the U.S. Billboard Hot 100, and has also cracked the Top 20 in Denmark and Sweden. You can check out the video below.