- August 10, 2015
The City's "YegdtBigE" initiative is sure to entice enthusiasm in the endeavors of Downtown's exciting evolution!

LET'S face it, up until just recently Edmonton's Downtown lacked a number of the essential qualities necessary for a vibrant and engaging central core. With the exception of some of our favourite summer festivals, there just wasn't much going on in the area during evening hours and weekends.


But who could blame Edmontonians for not coming Downtown in those days! It was almost entirely void of any distinct character or particular personality, absent of those endearing nuances that sets apart one town from another. There was an undeniable deficiency of life.

That was then! This is now, and these are the transformative years for not only the Downtown, but for the whole of Edmonton as we witness the "rebirth of our City's heart," according to the Downtown Edmonton Community League's vice-president Ian O'Donnell, who is part of the group (re)developing the area's visual identity. 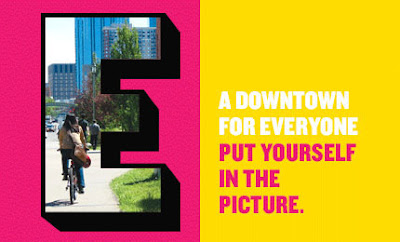 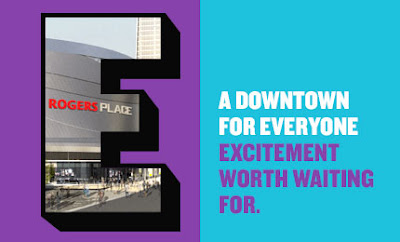 "Downtown Edmonton is currently experiencing its single largest boom in history," he continues. "It is difficult not to be anything but astounded by the shear amount of activity taking place in a 10x8 block area. When you hear numbers of 5.1 billion dollars being thrown around, it is clear that there is a snowball effect occurring."

The evidence of Edmonton's central expansion and revitalization is mounting, visible especially around what was recently christened by the Katz Group as the Ice District. That's where the 20,000-seat Rogers Place will serve as the anchor of what has become the catalyst for long-overdue change in Edmonton's urban fabric.


"For the first time in three decades we not only have great individual projects taking place," O'Donnell says," but projects building off of the momentum of other projects. This is how you achieve significant change in an urban setting. In the next few years, Downtown will be completely transformed and in many areas unrecognizable to many."

The Downtown Edmonton Community League, the City of Edmonton, and both MacEwan University & NorQuest are working together to evoke excitement, engagement and enticement in these game-changing developments. In fact, you may have already noticed their collaborative strategy if you work, study or play Downtown.


It's called the "YegdtBigE," and it's "a fun, celebratory and almost whimsical roaming storybook if you will," admits O'Donnell. He says it's "a window into the future of our Downtown...created to connect, educate and engage by way of intrigue and becoming a single identifiable symbol for all of the 'E'nergy and 'E'xcitement occurring in the Downtown now and over the next few years."


"Be excited about the rather amazing list of projects underway or forthcoming that will reinstill a sense of pride not only in our Downtown but City as a whole!"
-Ian O'Donnell, DECL vice-president

The "YegdtBigE" is literally a giant letter 'E' made out of metal and LED lighting that will be transported throughout the Downtown to various locales, beginning with the SW corner of the pavement in front of City Hall on Monday, August 10th! At 9 feet tall, 4.5 feet wide and 280 pounds, the "Big E" will be a clear and present symbol for what Edmonton wants to become, and where its Downtown is headed.

Backing this community-led initiative is the ever-growing MacEwan University and NorQuest College, both of which bring thousands of students to the Downtown daily. These area fixtures are "working closely with the #yegdt community to promote the fact that Downtown is for everyone and that post-secondary institutions in the Education District are a big part of that," says Dallas Stoesz, Director of Marketing at Norquest.


"The 'Big E' helps build excitement and enthusiasm around the changes, and when it is used, lets people see themselves in that (literally, as they can take a picture inside the 'Big E'), and see into many of the wonderful changes as they unfold."

Stoesz points out that, as an example of this, Norquest has incorporated the aplty named "Big E" into the school's construction hoarding design, "so that people can see into the construction space to observe it as it develops.

"Our project is one of many happening as part of the Downtown revitalization," Stoesz continues, "and we want to show everyone how we are contributing to the growth and development of this community. We definitely see ourselves in it, and encourage others to use it as well so everyone can see what is happening in the 'E'!"

The "Big E" - which was designed & constructed by Jordan Tomnuk over a month-long blitz - will be present at various locales and events in the central region, including the upcoming Downtown Campus Block Party hosted by both MacEwan & NorQuest.


Some 3,000 people are expected to show up for this free event that includes a barbeque, live entertainment, local area business & community organization booths, and various fun activities. It will take place on Wednesday, September 9th on 108th Street between 103 & 104 Avenues, right in the middle of these two major campuses, celebrating the start of the 2015/16 academic year.

Stoesz believes that it is important to celebrate the fact that these institutions are an important force in Downtown's revitalization, and that in return is significant to the growth of both MacEwan and NorQuest.

"[It will] have a huge impact on students who study in the Downtown area in many positive ways, from increased accommodations, restaurants, entertainment, and services options to improved transit and educational facilities."

More than 30,000 post-secondary students pursue education in the Downtown, and although MacEwan & NorQuest are the most visible facilities in the area, they are far from the only ones in what has become known as the "Education District."

This sector also includes the University of Alberta's Enterprise Square campus, Pixel Blue College, Edmonton Digital Arts College, chapters of Reeves, CDI and the Academy of Learning, and others. But it will also soon include two future post-secondary facilities currently under construction: NorQuest's Singhmar Centre for Learning and MacEwan's Centre for Arts & Culture (see below). 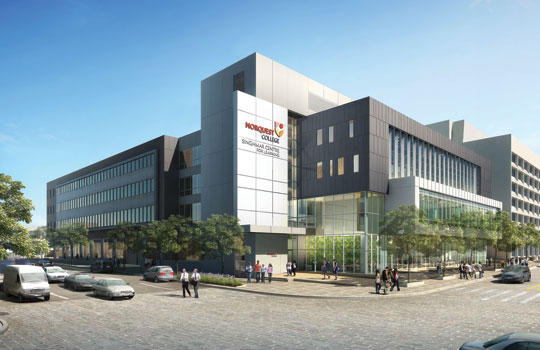 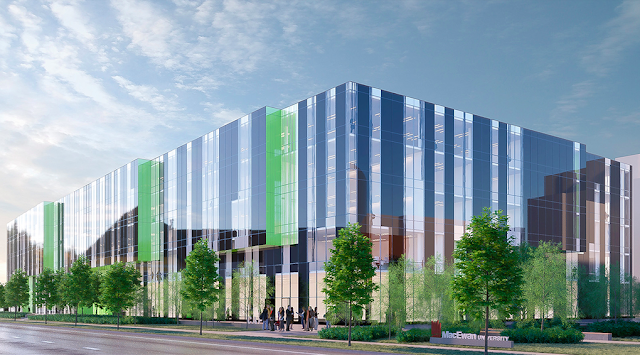 These future developments are just some of the many projects coming to fruition in the Downtown other than the Ice District itself. The "Big E" will almost certainly have some sort of presence at the steady stream of enterprises in the area, including the new Royal Alberta Museum, the Brewery District, Alex Decoteau Park, the Healy Ford Lands, The Legislature Grounds, Jasper Block, the Stanley A. Milner Library reno, the condo & business towers, and the many new restaurant, retail & entertainment options.

We're growing, whether you like it or not, and there's no stopping it. And why would anyone want to! Edmonton's Downtown always had the foundation for a vibrant and sought-after reputation, a lively potential now just over a year from reality.


If you ask me, that's reason enough to celebrate! It's affirmation of the "Big E" initiative and the role it will play in inciting pride in our evolving hometown, and reminding others that growth and change is vital to the heart of any town.