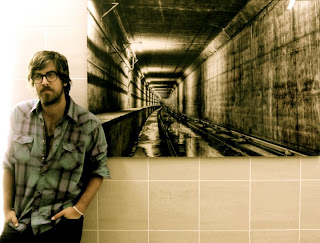 "IT was only just this morning when local musician Colin Close was "talking with a friend of mine who is really gonna run the world he lives, plays, and works in someday soon. He was having a hard morning," Close explains. "And some stuff had gotten him down. So he asked me, 'how many Bentley's you want when things go good?,' and all I could say was 'I don't need no Bentley's, man'."

Close, who participated in an interview with I Heart Edmonton back in May, told me that when he got off the phone with his buddy, "I started thinking about my own life, and all the things I don't really need." And, in the words of one Emeril Lagasse, 'BAM!' A song was born.

In his humble apartment, Close picked up his guitar, set up his camera, and shot this video earlier today. When he posted it on Facebook I suggested he name the untitled song "Luxuries" (I know, pretty good, right?!). Despite Close graciously declining the request, I thought I'd post the clip anyways. I forgive you, Colin.